No to NATO Operation in the Aegean : statement of Communist Party of Greece Marxist Leninist 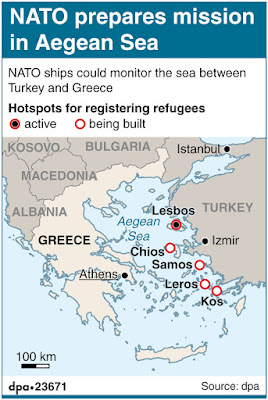 "With tensions between Russia and the West now being diagnosed as near-Cold War in their frigidity, it’s not implausible to see this move as the means for “reconnaissance, monitoring and surveillance” of Russian naval assets.

The Aegean is Russia’s only corridor to the Mediterranean from the Black Sea, to which it’s connected by the Bosporus and Dardanelles straits.

In practice, that means Russian vessels have to transit through NATO’s “anti-illegal immigration area of operations” before they can reach the Syrian coast.

The West is deeply nervous about Moscow’s military machinations, so an effective “early warning” mechanism to track the Russian vessels potentially heading towards the Mediterranean could be of great value.

It would also help explain why NATO, a “hard power” defensive alliance, has suddenly become involved in a human crisis where neither its naval forces nor its know-how will make much difference"

The deployment of a strong NATO naval force with air support in the Aegean “for monitoring the migrant waves”, as is stated in the resolution, constitutes a dangerous and reactionary development for our people as well as the peoples of the region.?

It constitutes a clear meddling of NATO in the increasing imperialist confrontation and intervention in Syria and the Middle East, a very dangerous development at a time when the proposed but dubious cease-fire is accompanied by continuous bombardment sand threats for the escalation of the war.?

It  intensifies   the   refugee   drama,   who   driven   by   the   bombardments   and   the massacres of the imperialists and their puppets in Syria, are met by the NATO warships and become tools in the confrontations and aims of imperialist and regional powers.?

It  opens very dangerous  paths for our country and its  people   as   we  become directly  involved in the NATO  war plans and,  also, because it opens again  matters of sovereignty in the Aegean and confrontations between the Turkish and Greek bourgeoisie.

The government of SYRIZA-ANEL after their “offer” for a new US-NATO military base, the nomination  of the  US  as   a  “precious  friend”,  and  the  reinforcement  of  the  US-backed Israel-Egypt axis go one step forward in the direction of deepening their dependency. ?

It is a step forward in the direction of complete subjugation to the demands of the country's EU “partners” (Germany, France) and the transatlantic “allies” (USA), the hawks of war, the vultures that drive our people into misery.

The   Communist   Party   of   Greece   (Marxist-Leninist)  condemns   this   dangerous development and call our people to strengthen their anti-imperialist and anti war struggle.

We must give to our people's struggle for bread anti-imperialist characteristics. We must express our solidarity to migrants and refugees by targeting our common enemies.

We must walk towards the creation of an All-peoples Front of Resistance and Demand against the assault of the system and the regime of subjection.

FOR A PEOPLES' FRONT AGAINST IMPERIALISM AND WAR :