INDIA: HARSH THAKOR WRITES SALUTE HEROIC RESISTANCE OF STUDENT COMMUNITY IN DELHI ILLUMINATING THE TORCH OF RESISTANCE AGAINST THE TYRANNY OF BRAHMANICAL FASCISM.DAY SHOULD BE WRITTEN IN THE ANNALS OF INDIAN HISTORY .OPPOSE THE STATE CONNIVANCE WITH HINDU COMMUNAL FORCES AND CONGRATULATE THE SECULAR RESISTANCE 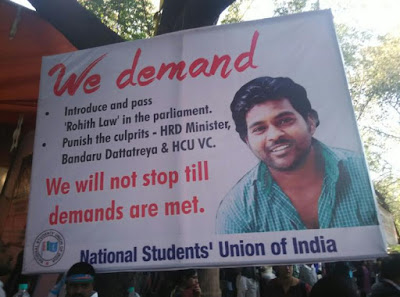 Thousands of students heroically resisted the iron feet of opression protesting the suicide of Rohit Velmula in Delhi.

Significantly the majority of participants were from the dalit caste,the most oppressed section in India today which for generations have been the victim of the oppressive caste system,which had it's origins in Hinduism.

Such a polarization has great political significance and reflects the building of dalit caste consciousness against the Brahmanic oppression.

True there is no leadership of a Marxist-Leninist-Maoist party but still such an organized protest lays the ground for a movement to integrate anti-caste movement with Marxist understanding.

The protest was so strong that the police could not prevent it which depicts the burning rage in the hearts of the participants.

Today in a similar protest in Mumbai in Victoria terminus activists were prohibited from staging a protest including the repression on Soni Sori.

It comprised largely of students from Tata Institute of Socials Sciences.

In the end for about twenty minutes the rally continued in Azad Maidan with participants condemning the branding of Umar k Khalid and Kanhaiya Laal .Such police prohibition depicts how the ruling govt is getting more repressive day by day.

The author was impressed with the spirited resistance of the students from T.I.S.S.We have to learn an abject lesson from the lawyers attack on students in Delhi and how the police gave it their blessings.

Cockily the 3 lawyers asserted they would again launch an attack as though they were implementing justice.Neverthless we must congratulate the student community around J.N.U and those of surrounding areas in India for defying the fascist forces and staging solidarity.

The anti -repression rally in Delhi some days ago was truly encouraging.The solidarity rally against arrest of Kanhaiya Lal and Umar Khalid is one of the most inspiring events of organized resistance and depicrs the progressive potential of the student community.

Setback in movement as led to ideological degeneration whereby youth can easily be inflame by Hindu comunal passions and not differentiate between true nationalism and communal fascism.Such a police assault is an abject lesson on how morally fascistic tour so called democracy is.

Even if one did not agree with them arresting the students for sedition is truly fascistic as it is dissent which is constitutionally allowed.

Today the campuses have become monopolized by the nationalistic jargon and pro-Hindu propaganda because of weakness of a genuine left movement.

Today the rally was infiltrated by ruling class forces like Congress and Aam Aadmi party but neverthless spread it's message like wildfire,illuminating the torch of resistance all over.

Protestors thronged from Hyderabad and Maharashtra in huge numbers.

The author is proud of the 1st February rally in Mumbai protesting against Rohit Velmula suicide which was the best protest of any kind held on the issue in his opinion.

It should be written in the annals of Indian revolutionary history.

Sadly sections of middle class have been greatly apathetic to the issue .

In Mumbai it is heartening that although small in number democratic voices are raising themselves.