Edward Morgan should be as famous in Wales as Dic Penderyn and Lewis Lewis but has largely been written out of history.


The 'Scotch Cattle' first appeared in the early 1820's.The movement was formed by discontented workers mainly from the coal mines of the Monmouthshire valleys.

Their aims were to improve the pay and working conditions of the local workers but their tactics  were for direct action against  any person or group who opposed their working class cause.

They existed as a secret society with its members swearing allegiance under pain of death to the Scotch Cattle.

Each Valley town and village had its own group and a leader was elected, usually a person respected and feared for his aggressiveness and physical strength, known as the 'Bull' or in Welsh 'Tarw'

Their meetings were always clandestine, being held at dark in secret locations usually on hillsides.

Victims were usually workers who had 'blacklegged' or refused to join strike action or workers who were prepared to work for less money.

A warning would be issued to offenders - failure to comply would invoke drastic consequences.

Retribution was swift - offenders were 'scotched' which involved a visit by the Cattle, faces blackened and dressed in animal skins with the 'Tarw' wearing a headdress bearing a bull's horns.

Normally, the punishment would be undertaken by a herd from another area to avoid recognition by local residents.

The Cattle's code, however, dictated that any foodstuffs found in the household would always be left intact.

Company property was also targeted, with Truck shops and other buildings ransacked and burned down.

Despite attempts by the authorities to penetrate the movement and bring the ring leaders to book, their activities continued for many years mainly due to the extreme secrecy of their organisation and the reluctance of the general population to speak against their actions.

The movement was said to have declined after 1835 when one of their members, Edward Morgan a coal miner, was tried for murder and hanged at Monmouth Jail on 6th April 1835 but see link below for the second Tarw Scotch Revolt in Aberdare in the 1850's. 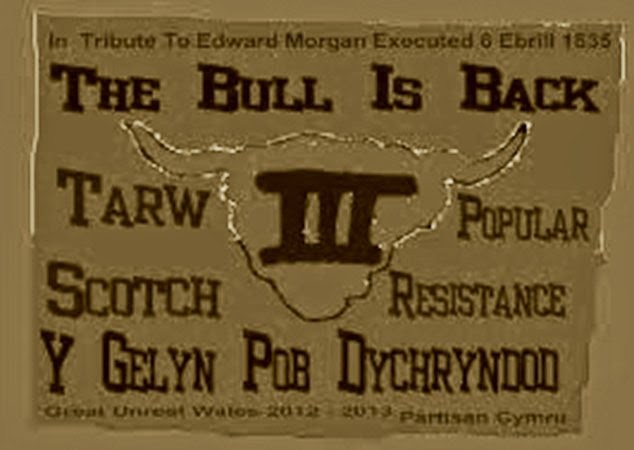