The Life of Maoist Political Prisoners in Morocco is in Danger ! Support Paris Rally on 8th April 2015 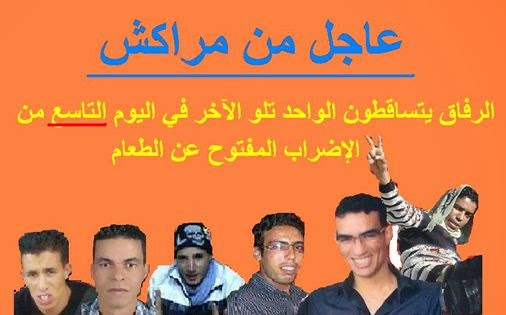 Morocco has several years of movements of popular struggle, in particular its universities against privatization of education, to improve conditions for students and for the political and trade union freedoms.

In this context, many students who were arrested and sentenced to long terms in prison.

Among those convicted students are 7 Maoist students: Elbour Aziz Mohamed Elmounden Hicham Almskini and Abdelhak Atalhaoui each sentenced to 3 years .

We should also mention the names of Aziz El Eikhalfaoui and Rédouane Aadimi, both arrested on 09.04.2014 and jailed since without any form of trial - just like Alaa Aderbali last student arrested .

Since 3/23/2015, the Maoist political prisoners of the group of Aziz Elbour and that of Aziz Elkhalfaoui, started and lead Morocco a indefinite hunger strike, first to denounce the abuses and physical assaults that these comrades suffer daily in the jails of the reaction and the other to succeed and impose their just and legitimate demands, mainly to improve their conditions of detention, their rights to care, to be visited and to be able to communicate with the outside, and finally the right to be able to continue their education without hindrance. 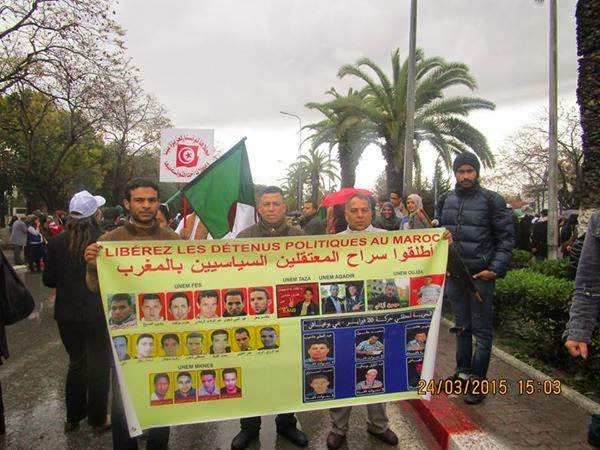 
These Maoist comrades were recently joined in their action by other political prisoners who also started an indefinite hunger strike and this resistance movement is growing day by day in several prisons of Morocco. This movement thus provides for the moment:- Abdul Wahab Alramadi and Munir Ashibha of Fez in prison- Zakaria Raakass prison of Kenitra- Mimoun Aznaï prison of Oujda-

To these activists struggle also add the struggle of the Saharawi students in Marrakech also on indefinite hunger strike.

It is also important to recall the commitment of 11 other political prisoners from Fes prison went on strike this week of hunger and five other inmates of the prison Meknes them have fasted for 48 hours .

These activists have already begun several hunger strikes; they have been repeatedly hospitalized for their resistance actions and because of this long process of struggle, their health has been debilitated.

Thus, 31.3.2015, Comrade Redouan Alaadimi lost consciousness and had to be evacuated to the hospital. Finally, after several days, he was taken back to the cell, but still in critical condition.

Also recall that Comrade Alaa Derbali had also lost consciousness on 27/03/2015 and has been transported to the hospital several times in a worrying state.

As for Aziz Elkhelfaoui, he lost consciousness again and his health is rapidly deteriorating day by day. Today the situation is for them more catastrophic and we can expect the worst.

Despite this, the reactionary regime continues to ignore the demands of comrades over there and tries to kill them slowly, as has been the case for two dead militants detained Mustapha MEZIANI (died 13/08/2014) and Noureddine ABDELWAHAB (died 01.04.2014).

We denounce this hard systematic policy towards comrades and declare that the Moroccan government bears full responsibility for anything that may happen concerning them.

SOLIDARITY WITH OUR COMRADES IN UNLIMITED HUNGER STRIKE!

Red Internationalist group for the defense of the revolutionary political

BEFORE THE ARAB WORLD INSTITUTE 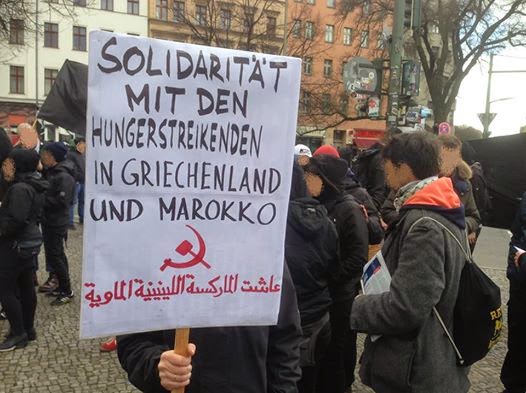 Salute to  solidarity with Moroccan Comrades
See Also :
http://democracyandclasstruggle.blogspot.co.uk/2015/04/morocco-our-comrades-unconscious.html
Posted by nickglais on 4/04/2015 02:59:00 AM