Wait for relief to stretch on

Muktsar farmers who suffered losses due to rain last year will have to wait for more time to get compensation for their losses.

The Finance Department has not cleared the bills and the Rs 28 crore sanctioned by the Financial Commissioner have lapsed with the end of 2014-15.

The officials concerned repeatedly reminded the authorities concerned to clear the bills, but to no avail.

Similarly, Rs 6 crore was sanctioned for farmers affected by waterlogging over the past three cropping seasons. That grant also lapsed .

An administration official said about Rs 22.8 crore of the sanctioned amount of Rs 28 crore was meant for extending compensation for crop loss.

“We will have to put up the case again. It may even take two months or more.”

Moga, April 1 Seventeen farmers and farm labour bodies under the banner of BKU (Ekta) staged dharnas in all districts of the Malwa belt today to protest the Centre’s new Land Acquisition Ordinance and to press for their demands.

Seeking withdrawal of this ordinance, the BKU leaders threatened to intensify their struggle and launch a statewide stir in support of their demands if their demands were not met.

The protests were held at Moga, Ferozepur, Fazilka, Faridkot, Muktsar, Bathinda, Sangrur, Mansa and other districts of the Malwa belt.

BKU (Ekta) president Joginder Singh Ugrahan and general secretary Sukhdev Singh Kokari said the farmer organisations had decided to intensify their struggle against the decisions of the Union Government regarding the acquisition of their productive land.

They also announced that agitation would be carried out across the state if the Food Corporation of India took any decision to stop the purchase of wheat in the state. They also demanded minimum support price for all crops on the pattern of wheat and paddy.

Kokari demanded a compensation of Rs5 lakh each to the families of farmer who had committed suicide due to debt and also demanded employment to the kin of the deceased.

Fazilka: A large number of farmers under the banner of BKU (Ekta-Ugrahan) and Krantikari, Kisan Sabha and Punjab Palledar Union held a district level demonstration outside the office of Deputy Commissioner, Fazilka, to oppose the land acquisition Bill proposed by the Union Government.

They accused the government of overlooking their interests. They demanded that not only the MSP of different crops should be continued, but all crops should be brought under this category.

Sangrur: Hundreds of activists of various farmers’ and labourers’ organisations staged a dharna and a rally outside the district administrative complex (DC office) here today. They were protesting against the non-acceptance of their long-standing demands. They also submitted a memorandum to the SDM.
The BKU (Ugrahan), BKU (Dakonda), Punjab Kisan Union (PKU), Zamhoori Kisan Sabha (ZKS), Krantikari Pendu Mazdoor Union (KPMU) and the Punjab Khet Mazdoor Union (PKMU) took part in the protest.

State president of the BKU (Ugrahan) Joginder Singh Ugrahan said many demands of farmers and labourers had not been fulfilled. Some of these had already been accepted by the government, but not implemented so far. He said if the government failed in implementing these even now, farmers and labourers would be compelled to intensify their agitation.

Tarn Taran: A deputation of the Kisan Sangarash Committee presented a memorandum to the deputy commissioner demanding compensation for the damaged crops due to unprecedented rain and hailstorm in the area. Sawinder Singh Chutala, state general secretary, said a huge loss had been caused to the crops especially to the wheat and vegetable crops. A special girdawari should be conducted to know the exact loss cause to the crops, he said.

Agitation against land acquisition Bill gains momentum, may spread across the state
Protests were held at Moga, Ferozepur, Fazilka, Faridkot, Muktsar, Bathinda, Sangrur, Mansa and other districts of Malwa BKU (Ekta) chief Joginder Ugrahan said they would intensify their stir against the acquisition of their productive land He said the agitation would be held across the state if the FCI stopped the purchase of wheat in the state The activists sought a relief of Rs 5 lakh to the families of each farmer who had committed suicide due to debt 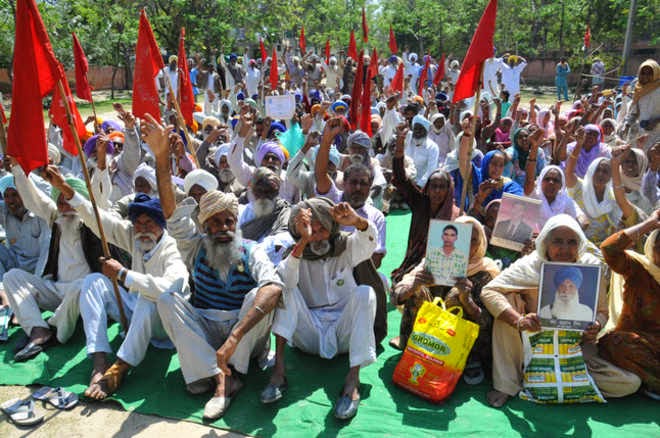 Bathinda, March 18
Hundreds of labourers, under the banner of Punjab Khet Mazdoor Union, today staged a protest against the state government for not providing them the possession of plots, which were allotted a couple of years ago.


The Punjab Khet Mazdur Union has been demanding the possession of plots to the remaining labourers.


In Februaray, 2014, before the Lok Sabha elections, labourers had staged a protest here demanding the possession of the plots, following which the state government agreed to their demand and issued a letter mentioning that they would get the possession of plots within a week.


The protesters demanded that the grants should be issued to construct houses. On Wednesday, hundreds of labourers staged a protest near the Children’s Park here and demanded the possession of plots.


Jora Singh Nasrali, president Bathinda district, Punjab Khet Mazdur Union, said, “The government has failed on every step and only pretends to be pro-poor. Both the Centre and the state governments have adopted anti-labour policies. Since 1992, labourers have been allotted around one lakh plots, whereas the government has failed to provide them the possession. Since attaining power in 2007, the SAD-BJP had allotted possession of plots to only 165 labourers.”


“There are hundreds of labourers who have not been allotted the plots under the scheme and a survey should be conducted to include those who did not get the plots. We have the letter mentioning that labourers should be given possession within a week. More than one year has passed but the government has failed to fulfill its promise” Jora Singh added.


“In around 42 villages of the Bathinda district, hundreds of laboueres have been awaiting the possession of the plots. We will intensify our stir, in case the government fails to fulfill our demands,” Jora said.