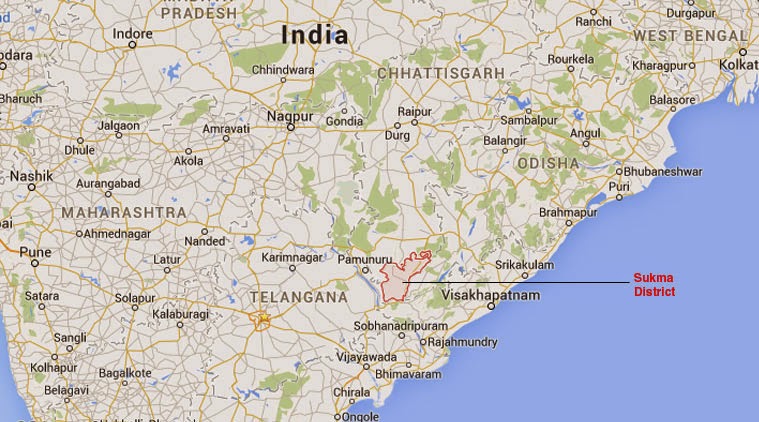 Seven personnel of Chhattisgarh’s elite Special Task Force were killed and 10 injured in a Maoist ambush Saturday morning in Sukma in south Bastar, in the biggest attack on security forces this year in the state.
The bodies had not been recovered until Saturday night. The spot of the ambush, in forests near Pidmel village, is about 11 km from the Kankerlanka police camp.
This is the STF’s single-biggest casualty in a day in several years. The men, numbering around 60, were attacked between 9 am and 10 am by cadres suspected to belong to the CPI (Maoist)’s South Bastar battalion, headed by Hidma.

The STF platoon commander, Shankar Rao — who had led the ill-fated operation against insurgents in the Maoists’ “liberated zone” in Dornapal Chintagufa belt — was given a “misleading” tip-off about the presence of Naxal commander Hidma along with 25 armed rebels in the area provoking him to make a “hasty and clumsy” preparation to take them on in their den, a senior police officer dealing with intelligence told this newspaper here.

“The slain platoon commander seems to have received misleading information fed through a Naxal mole in the late evening of Friday about presence of Hidma along with his guerrilla army at the certain place in Pidmela jungle. He was also given a wrong feedback on the size of the guerrilla army (25) leading him to limit his operation squad to 69,” the police officer disclosed.

Sources said that the martyred commander had a communication gap with Sukma district SP D. Shravan due to poor mobile network. But, the STF commander perhaps thought it wise to act swiftly fearing that any further delay in launching the operation would allow the Naxal leader to escape.

Hence, he made his men battle ready in just two hours and left the Polampalli camp for Pidmel jungle along with his team at around 2.30 am on Saturday. The STF team later found no trace of guerrillas at the designated place and was attacked while retreating. They were ambushed by a strong guerrilla army numbering around 400 at three places along 1.5-km forested route while retreating.

“The police headquarters here came to know about the encounter after a jawan in the team informed the STF deputy inspector general of police (DIG) Rajesh Sharma though a satellite phone about it from the encounter site”, an injured jawan who was part of the team told this newspaper here.
.
Source: Asian Age - London Edition 13th April 2015
Posted by nickglais on 4/13/2015 03:50:00 AM