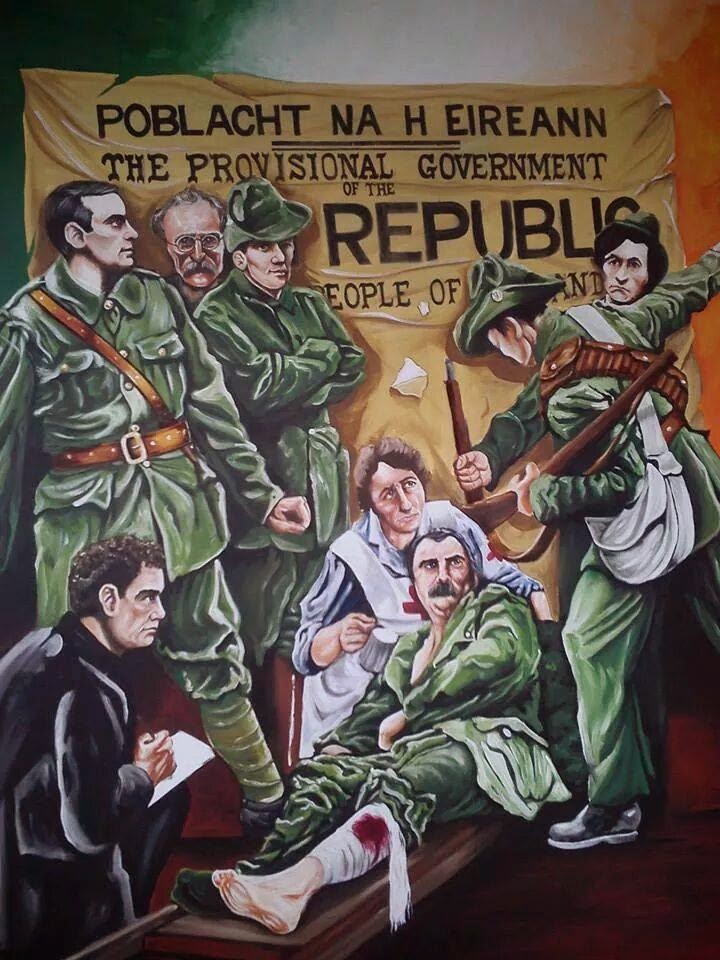 "In 1916 these... streets were a battleground. 99 years later there is another battle being fought – a battle about how the centenary of the Rising should be commemorated.


On one side of this battle is the political establishment. They want to remember all of the ‘participants’ of the 1916 Rising - to treat the British soldiers who suppressed the Rising as equals to the Volunteer soldiers who fought to establish an Irish Republic.

If you saw their 1916 video you’ll know what I’m talking about – packed full of images of the British Queen, David Cameron, Ian Paisley, Bono and Bob Geldof – without a rebel in sight!

In truth there are many in the political establishment who would rather commemorate the battle of the Somme than the 1916 Rising. And they would rather turn Moore Street into a shopping arcade than part of a 1916 historical quarter.

Then there are people like us - people who believe that the 1916 Rising was one of the most important and brilliant events in the history of our nation - people who want to not only remember 1916 – but also to celebrate it.

Closet Republicans Are Coming Out!

Over the next twelve months every chancer in the country is going to try and jump on the 1916 bandwagon. The most unexpected people are going to tell you that they’ve been proud Irish republicans all along. Blueshirts, revisionists, west-Brits, shoneens and gombeens will all declare themselves the true inheritors of 1916.

These closet republicans are

Learn the Lessons of History

The last hundred years have taught us words and slogans are cheap.

It’s easy to wrap yourself in the tricolour and declare yourself a proud republican.

It’s easy to say you want a country that cherishes all the children of the nation equally.

Collins did it, Dev did it, Haughey did it and over the course of the next twelve months they’ll all be at it.

But action and inaction speak far louder than words!

And that remains as true today as it did over a century ago.

So the next time someone declares their republican credentials to you, as they ask you to support them or vote for them why don’t you ask them a few questions.

Are they willing to do what needs to be done to establish a Republic of the type that envisioned in 1916.

You judge the answers for yourselves and see how they measure up to the politics of Connolly, the Citizen Army and the revolutionary politics of 1916.

The Dublin government, political parties, trade unions and others are all announcing their plans for events to mark the 1916 centenary.

And that’s all well and good but wouldn’t it be great if communities all over the thirty-two counties started organising their own commemorations, public meetings, the erection of monuments and community parties for 1916?

Why wait for governments or political parties to lead the way?

Imagine if communities in villages, towns and cities across the Thirty-Two Counties took ownership of the 1916 centenary celebrations.

What’s stopping any of us from working with our neighbours to organise community-based events to mark the centenary?

Imagine the potential for change that could be unleased if large numbers of people came to understand and then support the politics of revolution – of the complete destruction of the old order and the creation of a new all-Ireland Republic.

The message at the heart of socialist republicanism is one of possibility and hope – of a democratic economy and an equal society where everyone can reach their full potential – of the country that can be built after occupation and capitalism.

Why don’t we all set ourselves the challenge of spreading that message over the next twelve months – of working with our families, neighbours and friends to spread the revolutionary politics of 1916 and of organising centenary celebrations in our communities.