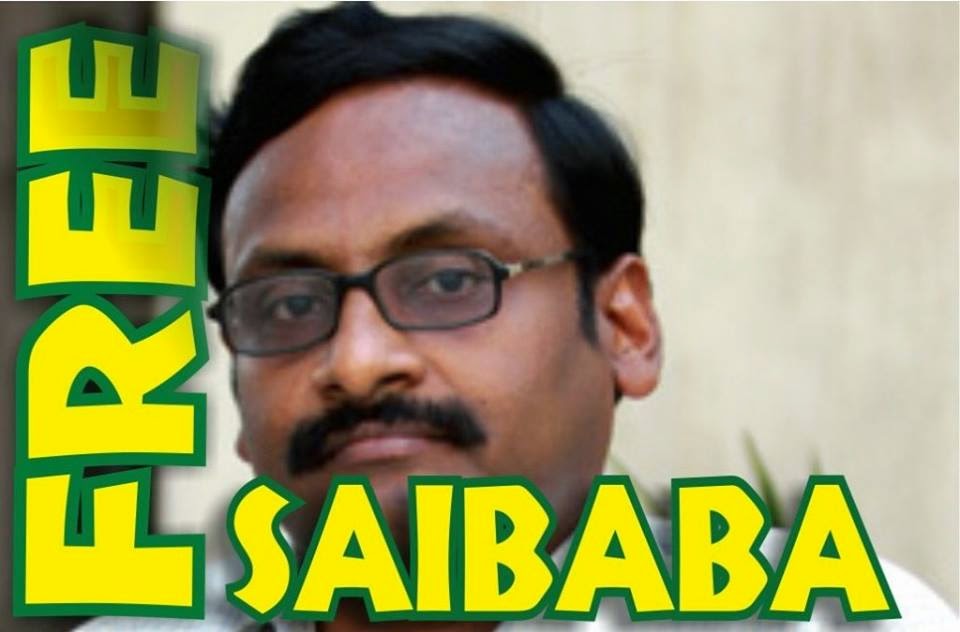 Dr, G N Saibaba, Delhi University Professor, who has been in incarceration since 9th May, 2014 has commenced an indefinite hunger strike from 11-04-2015 demanding proper medical treatment and food, both of which are being denied to him by the authorities of the Nagpur Central Prison.

Dr. Saibaba, who is presently lodged in the notorious Anda Barrack of the Nagpur Prison has been denied bail twice by the Sessions Court, Gadchiroli and once by the Nagpur Bench of Bombay High Court.

In the last order by the Sessions Court dated 4th March, 2015 the Sessions Judge referred to the reports of the Superintendent and the Chief Medical Officer of the Nagpur Central Prison which, while admitting the delicate medical condition of Saibaba, stated that he was being treated at the Government Medical College Hospital as well as the Super Speciality Hospital in Nagpur and that they were providing food supplements as per his medical requirements.

It was on the basis of such reports that bail on medical grounds was denied to Saibaba.

However, despite such claims by the prison authorities made before the court, the prison administration has not only continued to deny him proper medical treatment and food supplements, but also now even stopped certain items that were earlier allowed to him.

Faced with a situation of a steady deterioration in his health condition, Saibaba has decided to protest and has completely stopped taking food from Saturday.

His lawyers, who met him on Monday, 13th April, 2015, immediately submitted a memorandum to the DIG (Prisons) East Region, the prison authority under whose jurisdiction the Nagpur Prison falls.

The official however merely received the memorandum and refused to respond to the issues raised by Saibaba. He did not even indicate any willingness to allow the essentials that the prison report to the court has stated that they were providing.

Immediate action is called for to protect the life of Dr. G N Saibaba and obtain his release. 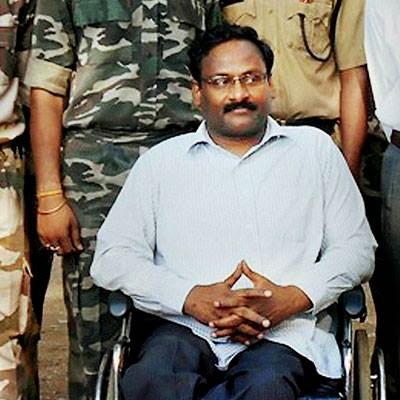 I want to tell you a story, of a little man, if I can; his name was – well, his name – we will come to it shortly. This little man was born into a wretchedly poor peasant family that lived on the outskirts of a little known village, with the out-castes and untouchables. This little man’s father had chosen to live with the marginal and the excluded, as a mark of solidarity with them – and this was motivated simply by an instinctive sense of justice, since the little man’s father was not even literate, let alone politically educated.

So the little man grew up amongst the sweepers and the scavengers, with hunger and deprivation as bosom companions to him and his siblings. Then, when he was barely five years old, he was afflicted with polio in both his legs, as a result of which he almost died from lack of medical facilities. But the little man’s father managed to stave off his death, by running from pillar to post, from every doctor to every dispensary that held out hope, till the fast-spreading disease was finally checked; nevertheless, the little man lost the use of both his legs completely from the disease.

This did not deter the little man or his father. He was enrolled in a mission school, where he learned to read and write and consumed everything he read with rapacious delight. Reading by the light of street lamps, dragging himself on his elbows and hands on the dirt roads of his village, from home to school, eating one meal in two days sometimes, the little man delighted in the world of books, and forgot about his own deprived and depraved one, for the hours that he was lost in them. The father meanwhile, took the little man wherever he could, showing him as much of the world as he could from the handlebars of his bicycle, obdurately refusing to accept that his son’s condition would limit his mobility. The little man thus grew up with a deep wanderlust and an indomitable will to overcome the limitations of his condition.

Which is how the little man, who was now no longer little but a full-grown, popular and well-liked young man, despite his 90% disability, went on to complete his school, pre-university and undergraduate degrees with flying colours, largely on the dint of scholarships and fellowships earned through sheer academic excellence. And as this young man grew into maturity, he also saw the colours and prejudices of the world around him, and learnt of its profound inequalities and injustices, and of the many, many crores of people who were systemically and systematically disadvantaged from birth – if not in medical terms like him, then in social and economic terms, very much like him, and in fact, much worse off than him.

So it was that when he moved to the big city of Hyderabad for his Master’s degree, he was already filled with a steely resolve to fight these injustices with the same never-say-never spirit with which he had fought, and continued to fight, his own debilitating circumstances. This is how the young man, by the time he completed his Master’s degree, had become an accomplished, respected and hugely popular scholar and political activist.

But the young man wanted to see more, to learn more, to do more – so he gave up the familiar terrain and people and tongues of Hyderabad, and moved to Delhi, with his newly married wife. Struggling to battle the harsh and callous conditions of the bigger city, coping with unfamiliarity and unemployment and prejudice and loneliness, this man, against his better instincts, against the enormous demands placed on him mentally and physically and financially, nevertheless stayed on and moved from job to job till he was finally appointed as a lecturer in a Delhi University college.

This man is now a scholar and teacher of international standing and repute. He completed his doctoral degree, and has travelled extensively, nationally and internationally, presenting papers and giving lectures. And he has spoken out strongly, consistently and irrepressibly against the injustices and inequalities that he grew up with, and others that he has learned about, and yet others that are evolving around us, in ever-multiplying forms, as the welfare state bids farewell and exits the political stage.

The polymorphous perversity that has pushed out and replaced the welfare state however, is profoundly invested in retaining, maintaining, sustaining and indeed further entrenching precisely those – and other – injustices and inequalities, because that is precisely what it feeds on, and thrives on, and cannot bear to have challenged, least of all by the likes of this man, who epitomises and embodies everything that it wants to crush and destroy – indomitable spirit, fearless resistance, and the will to overcome the cruelest of odds.

Little wonder then, that the perverse drones of this polymorphous perversity sought to arrest a man already in a permanent state of arrest, thanks to his disability. Little wonder that they did so Mafioso style, by blindfolding and abducting him from his car on a university street in broad daylight in full public view, and swiftly bundling him by air to another city. Little wonder that they brought case after fabricated case against him, starting with the charge that he was holding stolen property at his house (can there be anything more absurd than accusing a wheelchair bound man of running around stealing property?), and leading up to charging him with conspiring to wage war on the state (in answer to the previous parenthetical question – yes, incredibly, our polymorphous perversity can go, and has gone, to the even more absurd lengths of accusing a wheelchair bound man of seeking to bring down the great Indian state!).

Little wonder then, that they chose to do so in the peak period of a general election, so that the absurdity of their actions would simply disappear into the still greater absurdities of the great Indian circus of the elections that are farcically celebrated as the greatest festival of democratic participation in the world. And what greater comment on the farcicality of that vaunted “democracy” can there be than this arrest, and its timing, and its rationale, and its method?

And what greater ironical comment can there be on the story of this man, if, after all the odds he has overcome, after all the disabilities he has brushed aside, after all the deprivations and handicaps he has forged through, after all his achievements and accomplishments, he should be silenced and immobilised through the sheer brute force of the very polymorphous perversity that he has spent his life battling and overcoming?

As we now know, this man is now in solitary confinement, in an “unda cell” (egg cell), without light or ventilation, deprived of medication, unable to use even the toilet without severe pain and discomfort, crawling on hands and elbows wherever he is made to go – all in a desperate attempt to destroy his dignity, break his spirit and get him to confess to crimes he neither committed nor of which they have any proof of his committing.

G N Saibaba is not just another “good doctor”. He has become the biggest “little man” in the country today. His voice is the voice of the marginal and excluded that he grew up with, in that village in his youth – of every marginal and excluded voice in every village in the country. His story is their story, and must not be muzzled, and cannot be silenced. Saibaba must be freed for that story to be freed. Immediately.