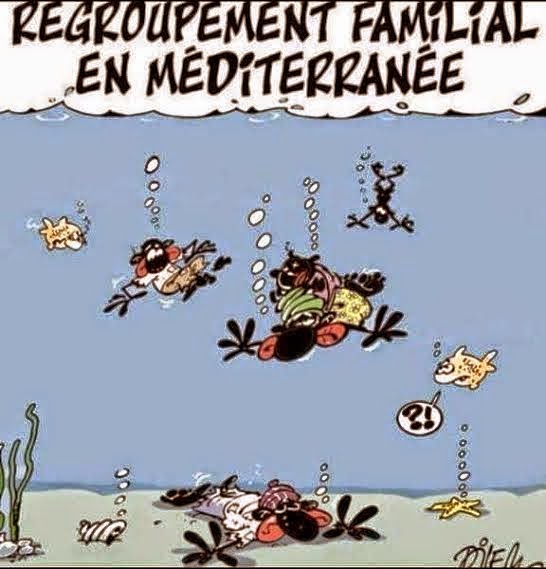 After all the solidarity and #JesuisCharlie hashtag, Charlie Hebdo ridicules the African migrants who drowned whilst on their way to Europe. They wrote 'Family Reunion in the Mediterranean'.

Democracy and Class Struggle is pleased to note the opposition to Charlie Hebdo receiving the PEN Literary Award by authors and literary people - the pseudo progressiveness of Charlie Hebdo is a reflection of the current confusion of intellectuals who pose as leftists but act as rightists in defence of Charlie Hebdo and needs to be exposed..

The Letter to PEN is published below.


In March it was announced that the PEN Literary Gala, to be held May 5th 2015, would honor the magazine Charlie Hebdo with the PEN/Toni and James C. Goodale Freedom of Expression Courage Award in response to the January 7 attacks that claimed the lives of many members of its editorial staff.

It is clear and inarguable that the murder of a dozen people in the Charlie Hebdo offices is sickening and tragic.

What is neither clear nor inarguable is the decision to confer an award for courageous freedom of expression on Charlie Hebdo, or what criteria, exactly, were used to make that decision.

We do not believe in censoring expression. An expression of views, however disagreeable, is certainly not to be answered by violence or murder.

However, there is a critical difference between staunchly supporting expression that violates the acceptable, and enthusiastically rewarding such expression.

Power and prestige are elements that must be recognized in considering almost any form of discourse, including satire.

The inequities between the person holding the pen and the subject fixed on paper by that pen cannot, and must not, be ignored.

To the section of the French population that is already marginalized, embattled, and victimized, a population that is shaped by the legacy of France’s various colonial enterprises, and that contains a large percentage of devout Muslims, Charlie Hebdo’s cartoons of the Prophet must be seen as being intended to cause further humiliation and suffering.

Our concern is that, by bestowing the Toni and James C. Goodale Freedom of Expression Courage Award on Charlie Hebdo, PEN is not simply conveying support for freedom of expression, but also valorizing selectively offensive material: material that intensifies the anti-Islamic, anti-Maghreb, anti-Arab sentiments already prevalent in the Western world.

In our view, PEN America could have chosen to confer its PEN/Toni and James C. Goodale Freedom of Expression Courage Award upon any of a number of journalists and whistleblowers who have risked, and sometimes lost, their freedom (and even their lives) in service of the greater good.

PEN is an essential organization in the global battle for freedom of expression. It is therefore disheartening to see that PEN America has chosen to honor the work and mission of Charlie Hebdo above those who not only exemplify the principles of free expression, but whose courage, even when provocative and discomfiting, has also been pointedly exercised for the good of humanity.

We the undersigned, as writers, thinkers, and members of PEN, therefore respectfully wish to disassociate ourselves from PEN America’s decision to give the 2015 Toni and James C. Goodale Freedom of Expression Courage Award to Charlie Hebdo.