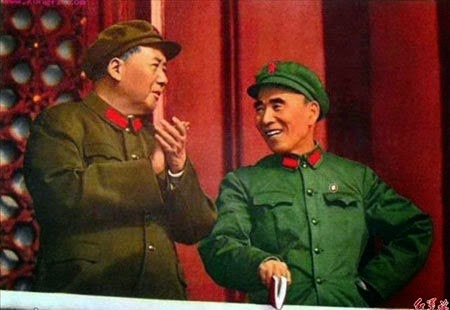 Comrade Nicklglais wrote this article about 10 years ago when he did a study of Lin Biao and Lin Biaoism .

We post some links below this article which examine a trend called Third World Maoism which largely but not exclusively turns out to be Lin Biaoism.

The so called "Maoist" Rebel News" has also embraced Lin Baoism but  still trades under the false description of Maoism  and currently promotes the confusion created by the LLCO's counter revolutionary petty bourgeois politics.

Chang Jung and Jon Halliday love to compare Mao to Hitler but the absurdity of their comparison becomes evident when they raise Lin Biao's son Li Guo also known as "Tiger "to a comparison with Claus von Stauffenberg, the German officer who tried to assassinate Hitler in 1944.

Jung Chang and Jon Halliday skip over the political differences between Mao and Lin Biao and everything becomes personal between Lin Biao and Mao and politics disappears.

The important political differences between Mao and Lin Biao manifested themselves after the 9th Party Conference in the way Lin Biao was using his control of the military in a bureucratic way.

Lin Biao also took advantage of Sino-Soviet border clashes in the spring of 1969 to declare martial law and further used his position to rid himself of some potential rivals to the succession.

Several leaders who had been purged during 1966–68 died under the martial law regime.


In foreign affairs the Lin Biao line was the tactical policy of the cultural revolution, fight both enemies at the same time with equal force and spread revolution, ignoring or showing hostility to other aspects of the international situation.

In regard to party and state Lin Biao intended to retain military hegemony if not dramatically increase army control over society.

Zhou Enlai supported by Mao wanted the return of civilian control of society after the cultural revolution in opposition to Lin Biao's line of the army in control.

In foreign affairs both Zhou Enlai and Mao wanted a foreign policy that favoured distinctions between imperialists, to determine which is the principal and which is the secondary enemy at a given time and to make use of the contradictions within the enemy camp and between the enemy camps.

This line meant accepting the temporary relaxation in relations offered by US Imperialism so as to remove one threat from China, attempt to divide the superpowers to the extent possible where they collude and build an important alliance of small medium and third world nations - to struggle against the "two overlords" defeating them one at a time

On August 22nd 1970 the Second Plenum of the Chinese Communist Party was once again held in Lushan. It was the Lushan Conference that first brought the differences between Mao and Lin Biao to the public.

Lin Biao surprisingly did not provide a copy of his Lushan speech in advance which was the normal curtesey he gave to Mao.

The sharp difference at the Lushan conference was over the post of State President, Mao did not want the post but Lin Biao insisted that Mao take the position. It was Lin Baio's insistence on this matter that alerted Mao to the fact that Lin Biao wanted him to take this position to ensure the vice President would go to himself and confirm his succession to Mao.

There was also Chen Bo Da insisting that Mao's genius be inserted into the Constiution of China. Mao was seeing clearly that Chen Bo Da and Lin Biao were using the Mao Cult as a cover for naked power seeking for themselves. Mao had Chen Bo Da removed from the standing committee as a warning to Lin Biao to change his ways.

After the Nineth Party Congress Lin Biao had continuously requested promotions within the party and Central Government leading Mao to suspect him of wanting supreme power as quickly as possible.

If Lin were to become Vice President he would legally have supreme power after the Presidents death.

Mao made his position clear about Lin Biao on a visit to Southern China after the Lushan meeting when he said that Lin Biao's politics had overestimated the role of the army in society, Lin Biao says that the army is everything, Mao said no the people are everything.

Mao wanted the rectified communist party to return to governing the provinces but Lin Biao wanted the army supervising the party.

Mao made it plain the party controls the gun not the gun the party.

Mao started moves to bring the army under control and this was the trigger that sent Li Guo the "Tiger:" into action to overthrow Mao.

During his visit to Southern China Mao still hoped to bring Lin Biao back to the straight and narrow inviting Lin Biao to criticise Chen Bo Da's "genius" nonsense which Mao so brilliantly ridiculed with his classic sense of humour.

Lin Biao comment that one word of Mao Tse Tung is worth 10,000 words of anybody else's were also the subject of Mao's wit on the South China visit.

But Lin Biao refused to criticise Chen Bo Da and take Mao's offer of a way out of conflict and started to behave erratically at public functions..

While Chang Jung and Jon Halliday relish any gossip abouts Mao's personal life they are more circumspect when it comes to Li Guo conceding he was something of a playboy, but no details here as he is another Claus von Stauffenberg and it would not do staining the character of their hero, albiet he was the spoilt son of a doting mother who could see no wrong in him, but worried about his womanising.

But Li Guo was determined to kill Mao and raise his father to number one.

Qui Jin an historian who has studied the Lin Biao incident probably more than anyone else and whose father was head of the Airforce under Lin Biao believes that Lin Biao did not know all his son was up to and his son may have been acting on his own in organising the the attempts on Mao's life.

Her view that Lin Biao he did not know anything until the 12th Sepember at 9 pm I do not find credible as to many things were going on for him not to know nothing.

Lin Biao was not a stupid man as his history demonstrates he was a brilliant military commander and his Manchurian Campaign a classic of military history.

Li Guo, Lin Biao's son contacted Jiang Teng -Jiao the youngest general in China to kill Mao. with a plan was to shoot up Mao's train in Shanghai but the plot did not proceed as planned because the Korean War ace asked to do the job deliberately hospitalised himself to avoid carrying out the task.

Li Guo was now getting desperate and planned a suicide helicopter attack on Tiananmen Gate in Beijing but this was aborted at the last moment.

There does appear to be evidence of some kind of attack on Mao in Shanghai, assassination attempts were made against Mao in Shanghai from September 8th to September 10th 1971 according to police records.

However everything unravelled when Dodo, Lin Biao's daughter informed on her brother, father and mother as fleeing the country, the first plan to flee to Hong Kong was abandoned in favour of fleeing to Russia, with Li Guo shooting Lin Biao's bodyguard on the way to the plane, the plane was forced to take off without sufficient fuel and crashed over Mongolia killing Lin Baio his wife and son and all on board..

Mao was deeply shocked by the turn of events and began a purge of the armed forces which according to Jung Chang and Jon Halliday "not a single person was executed" page 685 of "Unknown Mao".

What did Hitler do after Claus von Stauffenberg failed in his assassination attempt ?

" About 180 to 200 plotters were shot or hanged or, in some cases, viciously strangled with piano wire or hung up on great meat hooks, and executed. Hitler had some of the gruesome executions filmed and watched the movies."

Well you make an ambitious playboy son into an brave man like Claus von Stauffenberg, you admit Li Guo wanted to kill Mao on a number of occasions but failed, furthermore he caused the death of his mother and father as a result from his fool hardiness in taking off in a plane half full with fuel which crashes resulting in the death of all on board.

That was not all ,as Lin Biao's friends and associates like Qui Jin's father as head of the Airforce were also implicated in Li Guo's plots and suffered disgrace and were purged.

We are told to regard Li Guo as a hero and not as the fool he was.

Let the consequences Li Guo's self consuming hatred of Mao stand as a warning to Jung Chang and Jon Halliday.

PS: The ex "Maoists" of the LLCO  and the fake "Maoist" of MRN can go to Lin Baoist Hell and follow in the footsteps of  Li Guo and his admirers Jung Chang and Jon Halliday.

If you only study one further article we recommend you read the first one listed here :

Below is a book of contributions on Confucius and Lin Biao