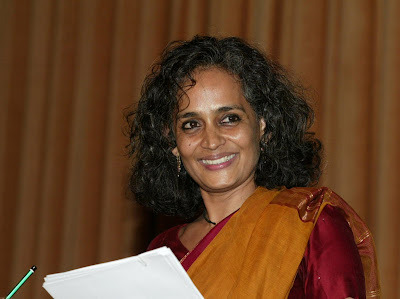 KOLKATA: Accusing the Centre of waging war against the “poorest people,” under the pretext of fighting Maoists in the mining belt, with the purpose of creating a “good investment climate,” author and social rights activist Arundhati Roy on Wednesday said creation of an atmosphere conductive to negotiations between the government and left-wing extremists was the only way out of the ongoing violence in the red corridor of India.

Addressing a press conference here, Ms. Roy said: “Let the State governments make public the terms of the hundreds of memorandums of understanding signed with corporate houses, rehabilitate the thousands of people displaced by the violence perpetrated by the security forces and the Salwa Judum [state-backed vigilantes in Chhattisgarh] and also restore a sense of confidence among the tribal population about their positive intentions. That is the only way out.”

Reacting angrily to questions why she did not condemn Maoists for the April 6 massacre of 76 CRPF jawans in Dantewada in Chhattisgarh, she said the “condemnation industry is a hollow and cynical industry where people do not care about the people killed.”

Claiming that most people were living under an “undeclared emergency,” Ms. Roy said: “I feel that every single death, whether that of a police or Maoist or an Adivasi, is a terrible tragedy. The system of violence imposed on us in the structural process is increasingly becoming a war between the rich and the poor. I condemn the system of militarisation of people that sets the poor against the poor.”

Though she admitted that several Maoist crimes could not be justified and deprivation did not validate violence, Ms. Roy said ‘violence of resistance' could not be condemned when hundreds of Central forces cordon off tribal villages — killing and raping people with impunity.

Saying she did not have the skills for mediating between the Centre and the rebels, Ms. Roy added that her message to the Maoists was they should not dominate the cause of the tribal population for motives of their own in the future.

That 99.9 per cent of the Maoists were tribal people was “a coincidence of political aims,” she said.

The practice of both the tribal population and Maoist ideologues using each other had its roots in their loss of faith in institutional democracy.

Asked whether the blowing up of schools by the Maoists, on the pretext that the security forces could use them as camps, could be justified, Ms. Roy said: “Wherever there is a guerrilla warfare going on, schools are used as barracks. Those schools were not functioning anyway as teachers did not attend. The Maoists, however, welcome the teachers.”