How can tribals be silent in face of state terror? 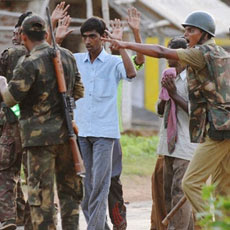 NEW DELHI: Retired judges, lawyers, human rights activists and poor tribal villagers were united in their demand for a change in the way the government views development — from a paradigm of increasing the GDP or growth by displacing and impoverishing the poor, to one that means improving the standard of living of every single person in the county, whether he or she lives in hills, forests, plains or in a city.

This unfolded at a tribunal to look into the rights of tribal people in light of land acquisition, resource grab and ‘Operation Green Hunt’. Over three days, the tribunal heard activists and villagers from the tribal areas of Chhattisgarh, Jharkhand, West Bengal and Orissa recount the atrocities they experienced daily at the hands of local police and central security forces for protesting against displacement or other illegal activities on their land.

The tribunal has recommended stopping Operation Green Hunt and initiating dialogue with the local people. Other recommendations included stopping compulsory acquisition of land and forced displacement of people, putting an end to victimization of those who questioned the actions of the state and a citizens commission to look into human rights violations of tribal communities.

The places were different, the people were different and what they were protesting against could be different. But the testimonies that poured out over three days sounded eerily similar as were the stories about police brutality and oppression — a litany of wanton shootings, rapes, tortures, arrests with no charges, and invariably being branded ‘Maowadi’ or Maoist.

On Sunday, the tribunal concluded after hearing Bianca Jagger, an international human rights activist, who had visited Niyamgiri in Orissa, where Vedanta, the mining company, has acquired over 1,000 acres of land amidst strong local protests. Jagger urged the government to think about the cause for insurrection in the country. ‘‘The behaviour of the state against its people is what prepares the ground for insurrection. To prevent further insurrection, the government should respect the rights of the tribal people,’’ said Jagger after relating how people displaced by Vedanta were living in misery and disease.

Noted author, Arundhati Roy, stating that the government did not seem interested in peace at all, said, ‘‘In the government, war means creating a good investment climate so that billions of dollars worth of MoUs signed some years ago could be operationalized.’’ She hailed the wide bandwidth of various peoples’ movements across the country, from Gandhian non-violent movements to the armed resistance in the forests, for successfully protecting vast swathes of land and holding back the mining lobby from taking over.

Members of the tribunal while stressing that they did not support violence or Maoists, questioned how the tribal people could be expected to be quiet and passive in the face of state terrorism.