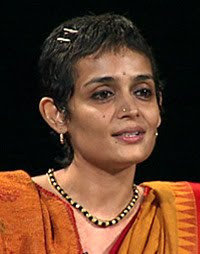 The Director General of Police, Chhatisgarh is reported to be seriously examining whether writer Arundhati Roy should be prosecuted under the Chhatisgarh Special Public Security Act (CSPSA) / Unlawful Activities Prevention Act (UAPA) for having written the article Walking With The Comrades, which was published by Outlook magazine recently.

The article is a journalistic account of what is happening on the other side of the battle lines in this War in Chhatisgarh which is also called Operation Green Hunt. It provides the readers with the story of what the Maoists are doing and thinking and how they are received and perceived by the villagers living in the areas where they operate. It is a detailed, sensitive and honest account of their history, their motivations, their thinking and their methods. Precisely because the account provides the perspective of the Maoists, it is a very valuable account, one that the people of the country need to hear. It is after all a phenomenon which has been described as the most serious security threat to the country. It is important for the people of the country to be as well informed as possible about the phenomenon of Maoism and how it has arisen so that a properly informed decision can be taken about how to deal with its challenges. In our view, the authorities on their own should have elicited inputs on the Maoist activity across the States, from as many diverse sources as possible and formulated its strategy to deal with the problem in a holistic and sensitive manner, essentially keeping the interests of the tribal central to such a strategy. Arundhati Roy’s inputs need to be viewed in this context.

Whether or not one agrees with the writer, a country which prides itself as a democracy must allow the free and honest expression of such views. Any attempt to stifle such expression of views on pain of prosecution would not only be violative of the freedom of speech guaranteed by the Constitution, it would seriously undermine the country’s claim that it is a robust working democracy.

Given its disquieting record of persecuting local journalists and activists for daring to stray from the official line, any attempt to book Arundhati Roy for her article would confirm the government’s determination to choke off dissenting voices, especially to prevent any independent information from coming out of this theatre of ‘War’