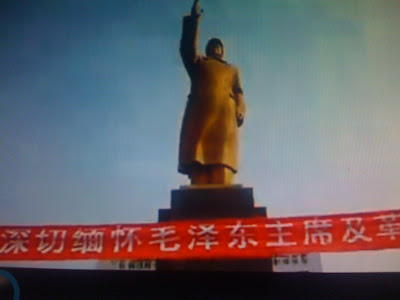 A Memorial for Chairman Mao and Other Martyrs - Luoyang City, Henan Province
Posted by Utopia (http://www.wyzxsx.com/) on April 14, 2010
http://v.youku.com/v_show/id_XMTYzMDk5OTky.htmlluoyang people


The banner says: A Rally by Luoyang People to Pay Tribute to Chairman Mao and Other Martyrs


The Speech (translated into English) is as follows:


Chairman Mao worked hard his entire life to win the revolution and to establish a new China. Anyone who has a conscience will always be grateful to him. We can say with certainty that without Chairman Mao there could not have been a new China.


Chairman Mao often reminded us that we should always remember the revolutionary martyrs for the contributions they made, and we should understand why they sacrificed their lives to fight for the cause. Chairman Mao once asked us whether we remember the many martyrs who died in the revolution. He said that he thought about them often. He said they sacrificed their lives, because they wanted to build a new China - a new China where there would be no class exploitation or class repression, a new China where the people would become the master of the country. Those revolutionary martyrs wanted to build a new China where foreign and domestic reactionaries could no longer oppress our working people.


In 1974 Mao wrote a poem as a memorial to the martyrs for their accomplishments. He said the revolutionaries were very courageous, and that they dared to challenge the sun and the moon in order to change our destiny. Chairman Mao repeatedly reminded us that we must not betray the road our martyrs traveled, and we must not betray the high ideals these martyrs held. Chairman Mao said that so many people sacrificed their lives in order to build a prosperous China, so that Chinese people could enjoy better lives. They wanted to build a strong China that could stand proudly among the world's other peoples and nations. Many revolutionaries died on the battleground fighting against the enemies or were executed by the enemies. They died without any regrets but with smiles on their faces. They shouted with their last breath: "Long live the Communist Party! Long live Chairman Mao!".


Chairman Mao said even when he was still alive they [the revisionists] could not accept what he said. Our Chairman said that he was not thinking of himself but of our country and our people. He did his best he could to assure our country would not change colors and that socialism would prevail. He said that even when he was alive, they [the revisionists] were already doing what they wanted to do. If they could accomplish what they wanted, then the blood shed by our martyrs would be in vain and people would have to suffer all over again. Chairman Mao continued to say that he knew the Chinese people wanted socialism and how he worried the Chinese people would suffer if China should abandon socialism. Therefore, he relied on the masses and refused to retreat.


Why did Chairman Mao work so hard for us and worry so much about us? What were his worries? Wasn't he worried that our country might change colors and that the blood of our martyrs would be for nothing? Wasn't he worried that our country would revert to barbarism and slavery? What would our martyrs have thought, if they had known that the socialist values and morals of our society have been so totally corrupted, and that our peoples' lives again have fallen into such deep water? Isn't it true that all Mao's worries have become reality?


We gather here today not just to show our deep appreciation to Chairman Mao and our martyrs. We gather here to assert that our martyrs did not sacrifice their lives for nothing. If we still have our consciences we cannot forget what the Communist Party had struggled for. Today we have things to tell our Chairman and martyrs. We want to tell you with shame and regret that we lost what you left for us - the right to be the masters of our country and the beautiful future of socialism. It was our fault but now people have awakened. We know the revisionists have seized power. We, the proletariat are united with our determination and our fearless spirit. We are singing our battle song - the Internationale. We do not rely on any savior, nor do we rely on any gods or emperors. We rely only on ourselves. This is our last struggle and we are united for tomorrow's final victory. This country is our country and the people are our people. The battle drums have been sounded. We are marching forward to fight the reactionaries and to smash the bourgeoisie into pieces once for all. We want to make sure that the generations after us will not suffer again. We are going to once again hold up the flag of Mao Zedong Thought on this land. We will fight to restore true socialism.


(Translator note: This is not an exact translation word for word. The sound quality of the video was not good. Some words were lost. However, under the circumstances the translation has captured the important meaning of the speech, the expressions of the speaker and his choice of words and phrases.)Thanks to Mike of Serve the People for this:
http://mike-servethepeople.blogspot.com/2010/04/anti-revisionist-peoples-rally-in.html
Posted by nickglais on 4/25/2010 12:53:00 PM