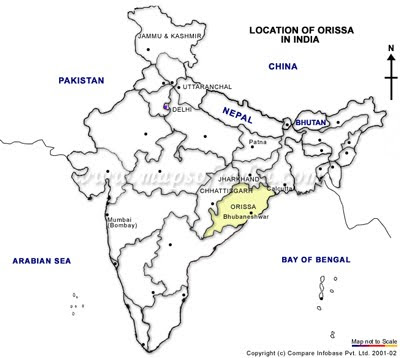 The offensive which got underway amid little fanfare has so far met with no resistance, a senior police official associated with the operation told The Indian Express. One of the 5 battalions of BSF which have arrived in southern Orissa for the offensive have already participated in the operation along with State police and CRPF.

"We are yet to get any tangible result. It seems the Maoists are on the run," a senior CRPF official told The Indian Express. Central Task Force Commander Vijay Raman also confirmed that the operation has started.

Though the last battalion of BSF arrived in Koraput a few days ago, the first battalion which arrived on March 18 had already undergone synergisation and familiarisation process at the local camp. After a week's training, the first batch of highly-trained BSF forces started the operation. A DIG of the BSF now stationed in Koraput is helping the central forces synergising the operation with the State police.

Armed with sophisticated weapons, GPS systems, night-vision binoculars, landmine detectors and helped by bomb-disposal squads and sniffer dogs the combined forces have been doing operations both day and night. More than 95 per cent area of Malkangiri and 75 per cent area of Koraput are beyond the State's control.

Senior police officials in-charge of the operation said the operation would be intensified in the next one week with around 7000 police personnel from 10 battalions of central forces including 5 battalions of BSF scouring the area for the rebels. have been put under a Orissa's elite anti-Maoist force Special Operation Group which recently lost three jawans in Gajapati district to Maoist ambush is also spearheading the onslaught against the rebels. A chopper to evacuate the injured security personnel as well as for reinforcements and aerial surveillance of the jungles would soon land in Koraput.

The officials said the police forces are getting good support of the villagers who are by and large supportive of the offensive. "In the village we are conducting medical camps. Barring a few everyone else is quite sympathetic," a CRPF official said.

The officials said the real challenge would be to gain foothold of the areas by the end of May as the onset of monsoon in the first week of June would make the operation difficult in jungle areas.

Though Operation Greenhunt against the Maoists was to start sometime in October last year, the State police refused to kickstart the operation demanding deployment of BSF forces, who are trained in jungle warfare and more skilled than the CRPF. Lack of synergy between the State police and 3 battalions of CRPF stationed in southern districts was the main reason in delay of the operation.

On its part, the State is also geared up for the operation with allocation of Rs 20 crore for deployment of 5600 police personnel in the Maoist-affected areas during next first four months.

The Central forces would move northern Orissa districts of Sundargarh and Keonjhar after the operation in southern Orissa.