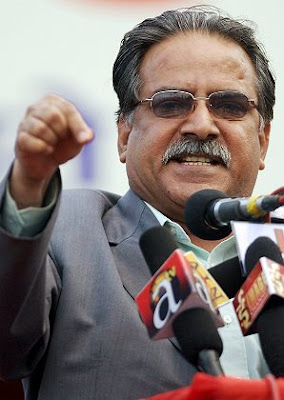 Kathmandu: Maoist leader Prachanda today demanded the resignation of Nepal's embattled government to save the faltering peaceprocess as he threatened to launch a massive agitation to dislodge it.

"This is the most worthless and corrupt government in history which is defaming the nation," he told a rally of Maoists supporters in the heart of the capital today.

He demanded the ouster of the CPN-UML coalition and formation of a "national unity government" under the Maoists, which is the single largest party in the 601-member constituent assembly.

"Once a national unity government is formed it will be possible to draft the constitution within one and a half months and the peace process to end within a month," the former prime minister was quoted as saying by The Himalayan Times online today.

"We believe the peace process can be brought to a successful conclusion in a month's time," he said at the rally to mark the fourth anniversary of a popular uprising against the former king.

The political leaders are struggling to meet a May 28 deadline to finish the drafting of a new constitution as stipulated by the peace process that brought the civil war to an end in 2006.

Disagreements persist on such fundamental issues as the structure of the national government and the creation of federal states.

Prachanda threatened to launch another phase of agitation to dislodge the government in a bid to uphold "civilian supremacy", national integrity and for timely drafting of a new constitution.

"It is not the end of the fourth phase of our agitation, but it is the beginning of a decisive agitation in all 75 districts across the nation," he said. He said the struggle has entered a "decisive" phase from today.

The Maoists, who have around 40% of the seats in parliament, want the CPN-UML government disbanded, followed by the formation of a new coalition led by them.

Analysts fear that the death former Nepalese leader Girija Prasad Koirala, who was instrumental in bringing the Maoists to mainstream politics after a decade-long insurgency in 2006, could derail the faltering peace process.
Posted by nickglais on 4/07/2010 12:03:00 PM