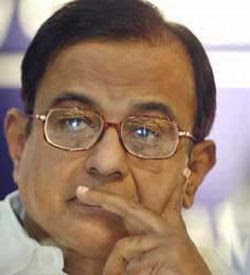 Instead of offering to quit, Mr. Chidambaram should very simply have resigned and walked away. That would have shown some genuine morality, not the play acting and drama associated with trying to salvage his bruised ego by “offering”to resign.

Real moral people make up their minds, talk to their family and friends the night before, take their special South Indian two yard coffee from stainless steel cups in the morning and then send in their resignation. Khalas! No ifs or buts, sir!--- as you had clearly stated a while ago to the Maoists. No conditions, no tentativeness—please ABJURE from drama therapy. The nation does not need it.

Mr. Chidambaram is not up to the task that he has defined for himself. He is a lawyer, a business executive, a one time academic, expert in corporate representation, suave spokesperson for collapsed megalomaniac organizations like Enron and enviro-pillaging Jurassic outfits like Vedanta. How can he be a Minister for “Homes”? Why does Prime Minister Manmohan Singh put up with such ineptitude camouflaged by hollow intellectualism and pedantic pronouncements on law and order?

To be a Home Minister (quaint term is it not for someone who has razed 640 villages to the ground and displaced a few hundred thousand people from their HOMES into strategic hamlets?) you must recognize 62 years of ineptitude at HOME, first. He should first try and understand why several million citizens of this country, who regard the hills and mountains as their “homeland” and were the first citizens of this country, do not want to be moved from their “homes.”

What has Mr. Chidambaram done so far?

Mr. Chidambaram has flirted with the same police chiefs of Dantewada and Bastar who masterminded the shooting of witnesses of rapes and massacres of adivasis by the CRPF and Selwa Judum, the same police officers who carry out the chopping of breasts of 70-year old women and the fingers of a 4 year old whose parents had already been executed. He confers and confabulates with the same police force (with a variety of reptilian, feral names) who on an average week carry out wanton killings in the name of “encounters” ranging from 5 to 10 Adivasis victims. Has anyone tallied up the civilian, non-Maoists, killed by Mr. Chidambaram’s police forces in the last one year alone? It would make the plight of the 76 hapless CRP personnel who were ambushed, a drop in the bucket. Why is no one bringing up those numbers? Hello! Shoma Chaudhry of Tehelka? Are you listening?

Mr. Chidambaram thought he had so smartly provoked the CM of Bengal Mr. Bhattacharya—“the buck stops at the CM’s office”—and then the buck stopped at his desk after the Dantewada ambush and all he does is say “Something has gone wrong, somewhere.” Is this a low budget horror movie we are watching here or enacting primary school idiom tutorials… like people in glass houses… etc etc?

Mr. Chidambaram had already called the Naxalites, savages, butchers and cowards. He plants this terminology, so that the NDTV/Times Now crew can hyperventilate, salivate and freely use terminology like “terrorists, massacre, and carnage” with impunity. Despite that when the Naxalites offered a 72 day ceasefire, he did not have the gumption to pick up the phone and talk. Here is a man who said that in 72 hours he can respond to the Naxalites! He could have done it secretly, taken the initiative to work out a deal, but instead he wanted a fax!! What a typically feudal Indian bureaucratic cop out for the Minister of all Cops! In a quiet moment, Mr. Chidambaram should seclude himself and ask his God, if he himself is responsible for this ambush and as well as the Silda attack and the Koraput one as well.

Mr. Chidambaram knows perfectly well that the Indian Government has spoken to the openly secessionist Hurriyat in Kashmir, has spoken to Underground leaders of the North East, even arranged meetings outside the country to meet them. And he wants a fax from people who even his own Service Chiefs have declared as citizens of the country and would not like to bomb, strafe and kill? Mr. Kishenji, the Maoist military commander, has openly declared that the Maoists would be the first people to defend the country and fight the Taliban if they tried to foment their type of fundamentalist nonsense in India.

Mr. Chidambaram does not want to talk to people who know the facts and the terrain and the history of this land. He likes to talk to people who are trained by foreign counter-insurgency experts, guerrilla warfare school masters who mouth platitudes about warfare and keep scratching their heads why the graduates of their famous anti-guerrilla schools are not following Standard Operating Procedures. There are apparently 48 well-known instructions on how to deal with insurgents. Well, sir, here is your problem! You see, real guerrillas create a new set of situations from point number 49 onwards, when you have just learned the first 48! That is what makes a true guerrilla. Your management training must have told you to “think out of the box.” Well, the guerrillas have been doing just that for a long time now. You are talking to the wrong people, Mr. Chidambaram!

Mr. Chidambaram and his new found supporters in the BJP, who have openly sided with his plight, must know that until and unless the Godhra massacre hoodlums are prosecuted and that includes Mr. N(azi) Modi and as well the Congress leaders of Selwa Judum and the 1984 carnage against Sikhs, (who by the way include several sitting MPS and even his cabinet colleagues) let us not talk shop about violence and non-violence.

There must be someone out there in Delhi who knows better, overcomes the usual clichés of “democracy, law and order and justice” and comes out with a refreshing new agenda that recognizes that India must face up to this new reality. It will simply not go away like a bad dream. It is time for India to comprehend that there is a reality outside of the rancid parliamentary ethos and the accompanying parliamentary parties; that there are thousands if not millions of activists who are advancing refreshing new ways to advance the welfare of this country and not cater to the 100 families who own more than 25% of India’s wealth; that ways have to be found to overcome this police state that is passed of as the world’s largest democracy; that a new alliance must be built by the broadest possible agreement of the people who are assembling today against this war on the people of India declared by Mr. Chidambaram himself. There must be someone out there, who can be a better “Home Minister.” Someone who will meet with civil society activists, constitutionalists, lawyers, doctors, engineers, writers, artists, rights activists, journalists who are against this displacement which is at the root of the problem.

It is time for Mr. Chidambaram to go! He has failed the nation, the first citizens of the country and the hopes and aspirations of the majority of the people who have not benefitted an iota from the neo-liberalist onslaught that he and his mentor, the Prime Minister of this country, have unleashed. It is better that he cuts the drama now and walks away.
Posted by nickglais on 4/13/2010 01:28:00 PM