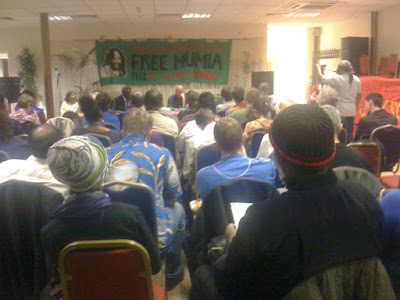 The Free Mumia Abu Jamal Campaign got of to a good start in London - Brixton with speeches from Radha D'Souza a Law lecturer and Steve Hedley of the RMT Trade Union and brother Omowale of the Pan Afrikan Society Community Forum.

Brother Tongogara of the George Jackson Socialist League called for a protest at the United States Embassy in London on the 19th May between 3- 7pm and all at the meeting agreed to mobilise the widest possible support for this US Embassy protest to demand freedom of Mumia Abu Jamal.

DEMOCRACY AND CLASS STRUGGLE CALLS FOR THE WIDEST POSSIBLE MOBILSATION ON THE 19th MAY AT THE UNIITED STATES EMBASSY IN LONDON TO SAVE LIFE OF MUMIA ABU JAMAL.
Posted by nickglais on 4/29/2010 01:37:00 PM