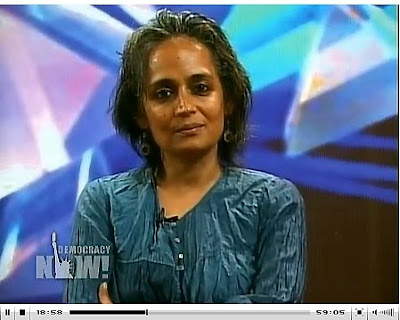 First came the report in today's Hindi daily Nai Duniya, published from Bhopal, with the dateline Raipur, that the police in Chhattisgarh was considering action against author Arundhati Roy under under Chhattisgarh Special Pulic Security Act-2005. And then came the corroboration from various police sources.

Apparently, one Vishwajit Mitra, has lodged a complaint at the Telibanda police station in Raipur, pointing out that the contents and photographs of Arundhati Roy's essay "Walking With The Comrades", published in the March 29 issue of Outlook could attract action as an offence under Chhattisgarh Special Public Security Act-2005.

Nai Duniya had earlier reported that DGP Vishwaranjan had confirmed receipt of the complaint and asked the State Intelligence Bureau to enquire into the merits of the case against the Booker prize winning author.

The Indian Express quotes the police as saying: "We are examining it to find out whether any offence has been committed".

The complainant, Vishwajit Mitra, told The Indian Express that Arundhati's essay had sought to not only "glorify" the Maoists but also denigrate the country's established system, including the judiciary. "Referring to a Maoist 'Jan adalat', she says in her essay that "in most jan adalats, at least the collective is physically present to make a decision. It's not made by judges who've lost touch with ordinary life", he pointed out, alleging that the writer also sought to justify Maoist other activities.

"Let the police investigate into my complaint and take a position. I am also keeping my options open to move the appropriate court to initiate legal action against the writer", he said.

Human Rights activist Dr Binayak Sen was in jail for nearly two years under the same law for which action has been demanded against Arundhati Roy. Dr Sen was arrested on the charges of having links with the Maoists.