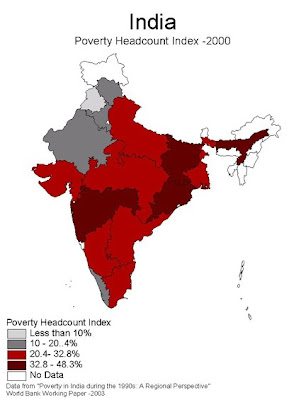 NEW DELHI: India now has 100 million more people living below the poverty line than in 2004, according to official estimates released on Sunday.

The poverty rate has risen to 37.2 percent of the population from 27.5 percent in 2004, a change that will require the Congress-ruled government to spend more money on the poor.

The new estimate comes weeks after Sonia Gandhi, head of the Congress party, asked the government to revise a Food Security Bill to include more women, children and destitutes.

India now has 410 million people living below the U.N. estimated poverty line of $1.25 a day, 100 million more than was estimated earlier, officials said.

India calculates how much of its population is living below the poverty line by checking whether families can afford one square meal a day that meets minimum nutrition needs.

It was not immediately clear how much more the federal government would have to spend on the poor, as that would depend on the Food Security Bill when it is presented to the government after the necessary changes, officials say.

India's Planning Commission will meet the food and expenditure secretaries next week to estimate the cost aspects of the bill, government officials said.

A third of the world's poor are believed to be in India, living on less than $2 per day, worse than in many parts of sub-Saharan Africa, experts say.

The government spends only 1 percent of its Gross Domestic Product (GDP) on healthcare facilities, forcing millions to struggle to get medicines, Oxfam and 62 other agencies said in a report called: "Your Money or Your Life" last year.

While India's economy is slowly recovering from a global recession with a GDP growth of 7.2 percent, millions of poor in rural India are finding it difficult to cope with around 17 percent food price inflation.