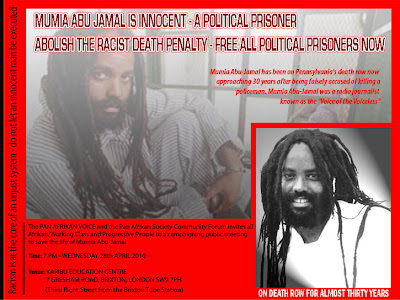 The PAN AFRIKAN VOICE and the Pan Afrikan Society Community Forum invites all Afrikan/Working Class and Progressive People to a campaigning public meeting to save the life of Mumia Abu-Jamal.

Mumia Abu-Jamal is in danger of execution as the Supreme Court on Tuesday January 2010 threw out a ruling that had set aside the death sentence of Mumia Abu-Jamal the former Black Panther and internationally known political prisoner. We demand that Mumia Abu-Jamal who is innocent of all charges be released unconditionally and immediately.

Mumia Abu-Jamal has been on Pennsylvania’s death row now approaching 30 years after being falsely accused of killing a policeman. Mumia Abu-Jamal was a radio journalist known as the “Voice of the Voiceless”

He exposed the racist and class oppression of the Afrikan and other oppressed working class. In 1985 he defended the Move family whose home had been bombed by a helicopter which killed 13 defenceless and innocent people including women and children.

Mumia Abu- Jamal’s case is symptomatic of the racism and class nature of the criminal justice system both in US and the UK.

The criminal justice system in the UK is similarly brutal and racist. The so called War on Terror is in fact a War of Terror allowing people to be held without cause and for the Afrikan and Muslim community to be targeted.

The US prison population is now 2.5 million. While in Britain it is 100,000 and rising. As of now the brutal prison system in US and the UK is disproportionately filled with young Afrikan men.

Robert Bryan lawyer for Mumia Abu-Jamal says people continue to use the false term “reinstating the death penalty” concerning Mumia. He has always been under a death sentence.

When there has been a victory, the prosecution has gone to a higher court, thereby suspending the effect. In 2008 the Court of Appeals ruled reversed the death judgement. The State petitioned the Supreme Court, so the reversal of the death penalty never took effect.

What is clear today is that Mumia Abu-Jamal is in imminent danger and the way has been cleared for his execution by the decision on January 19th 2010.

We the following organisations in Britain undertake to raise the profile of Mumia Abu-Jamal with publicity, demonstrations and meetings throughout 2010 and demand his unconditional release.


Join the campaign and build support in your Trade Union and workplace organisations.