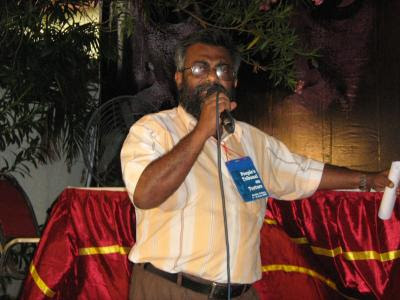 New Delhi: Asian Centre for Human Rights (ACHR) today condemned the arrest of Mr Kirity Roy, Secretary of Banglar Manabadhikar Suraksha Mancha (MASUM) by the Anti Terrorist Cell of Kolkata Police this morning as a desperate act to silence dissent in West Bengal and demanded his immediate and unconditional release.

Mr Roy was arrested from his residence at Serampore, Hooghly in Kolkata at around 9 AM today in connection with Taltala Police Station case no. 134/2008 dated 9 June 2008 under Section 170 (Personating a public officer), Section 179 (refusing to answer public servant authorized to question), Section 229 (Personation of a juror or assessor) and Section 120B (Criminal Conspiracy) of the Indian Penal Code against Mr. Kirity Roy and others of MASUM. This case was registered for organizing a People’s Tribunal on Torture on 9-10 June 2008 at Kolkata.

Mr Roy challenged the validity of FIR No. 134/2008 before the Calcutta High Court (Kirity Roy versus State of West Bengal & others vide WP No. 25022(W) of 2008) but on 26 August 2009 Justice Sanjib Banerjee of the Calcutta High Court dismissed the writ petition on the ground that police investigation is necessary to find out whether the petitioner organized a parallel judiciary. Mr Roy filed an appeal (MAT 1219/2009) along with a Stay Application (C.A.N. 10511/2009) in the Division Bench of Chief Justice Mohit Ranjan Shah and Justice Pinaki Chandra Ghosh. The Division Bench of Calcutta High Court is scheduled to hear the case tomorrow i.e. 8 April 2010.

“The arrest of Mr Kirity Roy just one day ahead of the hearing on the validity of the FIR by the Calcutta High Court is a clear attempt to subvert justice and persecute the human rights defenders in this country. This is nothing but a desperate act to silence any form of dissent in West Bengal.” - stated Mr Suhas Chakma, Director of Asian Centre for Human Rights.

ACHR has urged the UN High Commissioner for Human Rights, Ms Navi Pillay and National Human Rights Commission of India to intervene for the unconditional and immediate release of Mr Kirity Roy.
Posted by nickglais on 4/08/2010 11:54:00 AM