New Statement of the Communist Organisation of Greece 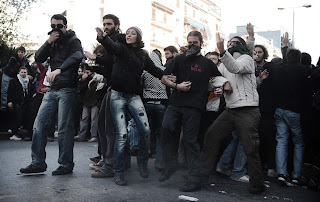 Merry Christmas in the streets!

On Friday 19 December the Coordination Councils of occupied schools and faculties organized in the centre of Athens a big concert of support to the rebellious youth, with the participation of many music groups and singers. During hours thousands of people followed the concert, with slogans against the government and the state terror. In Peristeri (the suburb of Athens where the new murderous attempt against the youth took place during the night of 17 December – see 8th Statement) a new march took place with the massive participation of secondary education pupils, teachers and parents.

On Saturday 20 December hundreds of activists “visited” the new Christmas tree in front of the Parliament (the previous one was burned a week ago) and threw many sacks full of garbage on it. The Special Forces attacked the protesters and proceeded to new arrests; the bystanders booed the police and liberated some of the arrested. The Athens’ Christmas tree is now guarded round the time by hundreds of Special Forces and the people of Athens are laughing at the attempt of the government and of the mayor to “recreate the Christmas atmosphere in the centre of the city” – under the protection of the fully armed Special Forces guarding the tree!

On Sunday 21 December many demonstrations took place in neighbourhoods of Athens (Kessariani, Ilio, etc.) and other cities, organized by the forces of the Radical Left, most of them targeting the local police stations. The evening took place in the Parliament the discussion for the national budget. However, the discussion unavoidably focused on the revolt of the youth. The block of “law and order” once more made its appearance: apart the usual government attacks against the youth and the Coalition of Radical Left (SYRIZA), in this exercised excelled again the extreme right-wing, the “socialist” PASOK and the “communist” KKE. The head of the extreme right-wing party LAOS, Georgios Karatzaferis, congratulated once more KKE for its “responsible attitude and exemplary organization” . The general secretary of KKE, Aleka Papariga, declared that “this is not a revolt; in an authentic popular revolt the masses will not smash even one glass” and once more tried to identify SYRIZA with the “provocateurs” . A leading cadre of PASOK, Theodoros Pagkalos, accused SYRIZA for “leading the phenomena of riots and political vagrancy”.

The head of the Parliamentary Group of the Coalition of Radical Left, Alekos Alavanos, in his combative speech declared: “When a frontal confrontation takes place, each political and social force must choose its camp: either with the system or against it. Today, the government party, the party of LAOS, and KKE are claiming that there is no revolt of the youth, and that all this is a conspiracy organized outside Greece. They remind us of the civil war and the post-civil war years, when the right wing was accusing the communists of been Moscow’s spies. Today, they accuse us even of been common criminals and human traffickers [see statement of KOE about KKE]. They remind us of the Sixties, when the right wing was accusing the girls of the left youth that they were prostitutes trying to attract the decent youth. Today, we heard the general secretary of KKE using the same terms with Ms Bakoyianni, Minister of Foreign Affairs. We heard Mr Karatzaferis congratulating KKE, accusing us of petting the rioters and proposing a new draconian law against the youth. All these are examples of how much the government of Mr Karamanlis is worried. That’s why the government party gets into this alliance with LAOS and KKE. They are all afraid of the near future, of the day when all the working people will rise next to the youth. We, the Coalition of the Radical Left, are warning them: They will not manage to make us retreat. We will not retreat even by one millimetre. We will not sign any declaration of loyalty to the system!”

On Monday 22 December the mobilizations continued on local level, while the Coordinations of university students unions and secondary education pupils prepare a new central demonstration in Athens, on Tuesday 23 December. In Peristeri, groups of young workers and students occupied the town hall, asking for the immediate liberation of the arrested and for the exemplary punishment of the murderers and of all the police members who attack the people.
Posted by nickglais on 12/23/2008 04:25:00 AM