Nepal will become people's republic within one and half years: Mohan Baidya 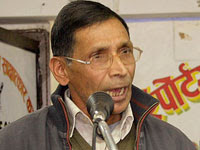 A senior Maoist leader and ideologue, Mohan Baidya 'Kiran,' has said Nepal will become a 'people's republic' within one and half years.

Mohan Baidya 'Kiran' In an interview with 'Europeko Nepalipatra' www.nepalipatra.com), a weekly newspaper published from London, Baidya said the main question now was how to draft a new constitution. "We have got one and half years available to draft this constitution. First we have to look at this time frame, second the new constitution has to be framed on the basis of the 'tactics' adopted by our party, and the third is all leftist, patriotic and pro-people forces have to unite.

After that, Nepal will become a 'people's republic' within one-and-half-years," said Baidya. Responding to another query, Baidya-known as a hardliner within the Maoists-said his party had earlier given the slogan of 'democratic republic.' "Nepal has already become a (democratic) republic, hence that 'slogan' has become obsolete. Now we have given a new slogan of 'people's republic,'" he said. Baidya further said that though his party was leading a coalition government, it would continue to wage struggles in the street, in the parliament and in the government. "Of them, street agitation should be our main strategy. There are a lot of major issues in the streets including protecting national sovereignty. Border encroachment continues. There have been wrong type of treaties and understandings related to Susta and Kalapani, these should be scrapped," he added. Saying that foreign intervention and interference had intensified in Nepal,

Baidya said a 'nationalist movement' had become necessary to end all sorts of intervention. Baidya said peasants, workers, landless people, former 'kamaiyas,' families of martyrs and those injured during previous movements should all take to the street and pressurise the government. "Similarly, our comrades who are in the Constituent Assembly should also engage in a movement while remaining alert on the issue of writing a new constitution in favour of people," he said. "If we can't launch such a movement, another force will take to the streets tomorrow. If those forces take to the street, they can bring down this government, disturb the drafting of the new constitution and bring anarchy in the country," he warned. "So, we want to move ahead by intervening in all three areas (street, parliament and the government)," he added.

Responding to another question, Mr Baidya said his party was indeed trying to 'finish off' the parliamentary democracy. "The parliamentary system has failed to address the problems being faced by the country. It has failed. There is no future for those who want to go to the parliamentary democracy," he declared. Baidya further said if obstructions were placed in the efforts towards building new Nepal, people will launch a struggle and CPN (Maoist) is the only party that can provide leadership to the (people's) struggle. "Finally, we will be able to build new Nepal," he concluded.
Posted by nickglais on 12/21/2008 02:20:00 AM