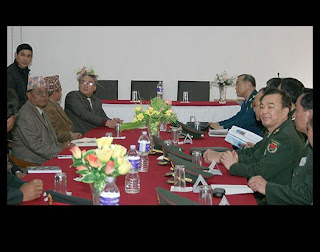 A delegation of senior Chinese military officials led by its deputy chief arrived in Kathmandu, Saturday.

The delegation coming close on the heels of the visit by Chinese foreign minister Yang Jeichi will hold talks with Nepalese officials on military cooperation and security, say reports.

The officials of the two countries have described the visit as routine exchange. However, an agreement on military cooperation is likely during the visit.

"An agreement could be signed about the military aid of Rs 100 million announced during (my) China visit," Defense Minister Ram Bahadur Thapa 'Badal' told Kantipur daily.

Earlier, during his visit to Nepal, Chinese FM Jeichi had promised China's support in strengthening Nepal's security.
Posted by nickglais on 12/06/2008 07:05:00 AM