Statement of the Communist Organization of Greece (KOE) 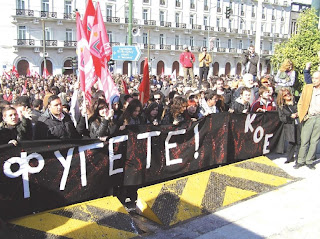 On Wednesday 17 December students of the secondary education and from the universities’ occupations blocked the buildings of the Athens’ Court of Justice in solidarity with the hundreds of arrested youth, demanding their immediate liberation. In the broader area of Athens the youth blocked main avenues and highways. The same day, the Coalition of Radical Left (SYRIZA) realized a coordinated nation-wide campaign in dozens of neighbourhoods and cities with local demonstrations and other actions, under the general slogan: “Billions for the banks – Bullets for the youth: Let’s throw them down!”. The anger of the youth and of broad popular masses mounts again, as the government and the “justice” are manipulating the evidence, leaking information that the cold blood murder of Alexis was not the result of a premeditated action of the policemen! The previous day, a large group of young activists from SYRIZA went to Acropolis and unfurled two giant banners, calling for Resistance and solidarity demonstrations.

Thursday 18 December was marked by two important events: (1) The huge demonstation of youth, teachers and left organizations in the centre of Athens, where dozens of thousands demonstrated once more against the government of K. Karamanlis. The march was once more brutally attacked by the Special Forces, and 8 demonstrators have been arrested. The combative resistance of the youth continued for hours. Equally large demonstrations took place in many cities all over the country, often marked by clashes with the police. (2) The news about the murderous attack against a group of pupils the previous night in Peristeri, a neighbourhood of Athens. There, an “unknown person” shot twice with a 38mm gun against a dozen of 16 year old pupils who were sitting near their school. The result was that one of the pupils was wounded, fortunately not fatally.

The reaction of the youth and of the Left was immediate. The Communist Party of Greece (KKE) tried to exploit the fact that the wounded is son of one of its cadres, but without (even now!) accusing the government for its anti-youth hysteria and the repeated attacks against the movement. The government tried to minimize the “deplorable incident”, while the police was claiming for hours that it was not a murderous attempt “because the first exams indicate that the gun used was an air popgun”. However the hospital where the wounded was brought for operation announced that the blind wound was provoked by a fire-arm. Later the police confirmed that the bullet came from a 38mm fire-arm.

Already early in the morning of Thursday the Coalition of Radical Left condemned this new murderous attack against the revolt of the youth, underlining that “irrespectively of who is the physical perpetrator of the attack, it is the government who armed him”. The local base group of KOE immediately produced and plastered all over the neighbourhood in hundreds of copies a poster calling for an immediate response of the neighbourhood’ s residents, and took the initiative to call all the local organizations of the Left to co-organize a demonstration the same afternoon. The local members of KOE also distributed in thousands of copies a leaflet calling for immediate response of the people and for intensification of the struggle. The KKE refused and organized its own separate protest, with general slogans in favour of their party, but without anti-government demands. All the other left organizations, with the participation of 1.000 people, marched for hours in Peristeri’s roads, with slogans against the government of murderers and the attempt to terrorize the youth.

The movement prepares a solidarity concert in the centre of Athens tomorrow, Friday 19 December. 750 schools and 180 universities and technical colleges are now under occupation. New protests are under preparation all over Greece, while the government and the mainstream Media hope that the 2-weeks long school and university Christmas holidays (starting tomorrow Friday) will diminish the movement’s combativity. Answering to that, the new youth slogan-warning to the government is “Merry Christmas in the streets”!