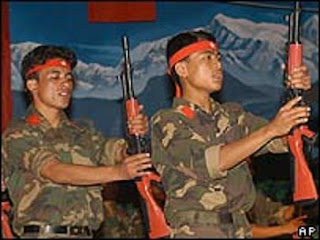 How should the debate on integration of army go ahead?

Integration doesn’t carry the meaning of reintegration or rehabilitation as the Nepal Congress is explaining it to be. The words reintegration or rehabilitation carries a quite opposite meaning. The integrating of the armies doesn’t mean that one should be assimilated into the other. But, it means that the two armies should be united into making one that represents a unified national army.

So far as the procedures of integration are concerned, the process and procedures are quite different from other countries. The context and the situation are different and the resulting procedures are different. The aspirations and mandate achieved through the People’s War and the 19 day People’s Movement are totally different from the situation and context of other countries. Therefore, the People’s Liberation Army (PLA) established by the revolution, here, fought against feudalism and its head, the monarchy. But the Nepal Army (then Royal Nepal Army) fought against the people, against the people’s movements and tried to protect the monarchy and feudalism. This is why Nepal army cannot remain in the same condition as it was. This requires the process of fusion to build a national army. The inner necessity to build a national army is not to keep two armies in one country. The meaning of two armies remaining is that the peace process has not been completed.

So, will the peace process be completed after the integration?

Fusing the two armies doesn’t mean that the PLA should be assimilated into the NA or vice versa. It means transforming both armies. At the same time, it demands to restructure the security sector. It means that the old structure of both the armies will be over. There would not be the old structure of PLA and NA. There would be only one new structure. This will be the only one convincing milestone of new Nepal. It’d be a simple method to achieve a long term peace.

Has the Nepal Congress become a hurdle for the peace process?

Yes, the Nepalese people think so. It is a surprising thing why the Nepali Congress doesn’t want the progress of peace process. The Nepal Congress and its leader, GP Koirala, have announced that he is in the process of driving the CPN (Maoist) back toward either the jungle or India. Why is he speaking like this?

He again says that the government should not pay the salaries and other allowances and should send them (the PLA soldiers) back to respective villages. His expressions clearly show that they are in the mood for breaking the peace process and initiate a civil war in the country.

How can you solve the problem then? Can you do it by carrying the debate of integration of Army among the people?

It’s an excellent idea to have a debate on army integration among the people. The people have understood the real essence of the integration issue. The people are the decisive force and they will finalize all those complex issues about Nepal. History tells us the necessity of people to raise the People’s Movement and fight the People’s War. The debate will not be enough if things are understood only by the leaders and the political parties. The people should be directly involved in the debate on the integration of the two armies to carry it to the logical end. The environment is favourable for a mass discussion and the people should be at front line of this historical discussion.

Are you certain that the people will get involved in a debate about army integration?

Do you think that only the feudal, compradors and bureaucratic capitalists are against the on going peace process?

Here the class interest plays the main role. In the beginning, they were against it because of their class interest. Now, they are not in the government, however, they are trying to create obstacles in the way. But, the people will make them fail in their efforts for aborting peace process.

How can you bring an end to the current impasse on army integration?

The agreements held before should be implemented honestly. The second is to build the high level commissions for the restructuring of the whole state mechanism. The army should be integrated as soon as possible. The process of army integration should be carried ahead. The government and the political parties should pay their attention for the restructure of security sector. Along with these, the full implementation of Federal Democratic Republic agenda should be implemented while making a new constitution.

What is the real essence of army integration?

The people raised the flag of liberation for freedom from feudalism. However, after the nineteen days mass movement, the state structure remained the same as it was before. This is why the people have to fight to overthrow the old structure and establish a new one.