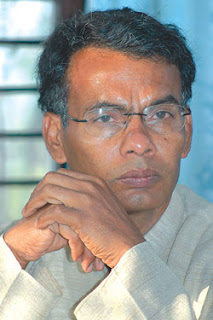 Former minister and CPN (Maoist) leader Matrika Yadav has warned that he will leave his party and wage a new round of armed struggle if it abandons the Madhesi cause.

The day the party (Maoist party) abandons the Madhesi cause and is no longer generous to the issue of Madhesi liberation will also be my last day in the party," Yadav said at a press meet organised by Maoist-affiliated Revolutionary Journalist Association in Saptari Wednesday, "Then I will raise arms to ensure Madhesi rights."

He added that he has felt a clear discord within the Maoist party in the way of looking at the Madhesi issues, clearly hinting that this may cause the party to betray the Madhesis.

The fiery Maoist central committee leader, who is known for his belligerent remarks and antics that cost him his ministerial position in the past, said that on many instances he has seen his party not being sensitive towards the rights of Madhesis due to which he has given serious thought to raising arms [to ensure Madhesi rights] many times in the past.

Yadav also revealed that the Maoist party has come under the influence of"Feudal and opportunists".

"The feudalists have gained in stature inside the Maoists," Yadav said,"It is becoming very difficult continue to remain in the party because of this."

Yadav also took the opportunity hit at the top Maoist leadership. He said PM Prachanda just sold big dreams to the masses, "but was never able to fulfill it" and accused Dr Baburam Bhattarai of being a "feudalist".

Democracy and Class Struggle says there are intensive renewed attempts by the Nepali Congress to bring down the Maoist led Government and divisions within CPN Maoist play into the hands of enemies of Nepalese Revolution like Nepali Congress.

We sympathise with some of the views of Matrika Yadav but not with his divisive public airing of his views and his abusive public attacks on Prachanda and Bhattarai. The CPN Maoist needs centralism as well as democracy and Matrika Yadav's ulltra democracy and lack of centralism is damaging to the unity of CPN Maoist and endangers the Nepalese Revolution..
Posted by nickglais on 12/31/2008 02:48:00 AM