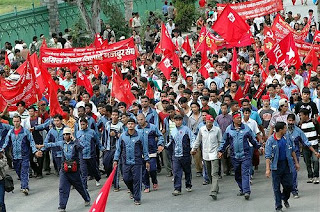 Excerpts from a talk given by David Hoskins at the WWP National Conference, Nov. 15-16.

Prachanda’s election comes after 12 years of intense political struggle. The Maoist party is Nepal’s largest party and is immensely popular with the masses. For more than a decade the party led an armed struggle that toppled the monarchy and led to the creation of a Constituent Assembly tasked with drafting a new constitution.

The Maoists placed first in the April Constituent Assembly elections. The first historic meeting of that assembly culminated in the total abolition of Nepal’s monarchy and the declaration of Nepal as a federal democratic republic.

From 1996 to 2006 the People’s Liberation Army was successful in liberating 80 percent of the countryside. Revolutionaries erected parallel state structures in the liberated zones that provided justice against corrupt landowners through revolutionary courts. They built roads and clean wells for drinking water, and provided healthcare to the poor.

In April 2006 the revolutionaries joined hands with a coalition of parliamentary parties in calling for a countrywide general strike against the ex-king, Gyanendra. The strike was backed by the revolutionary arms of the PLA which had launched a daring offensive across the country—overrunning police posts and army barracks and freeing political prisoners from jails.

As a result, the king restored the parliament, which promptly ordered the arrest of five of Gyanendra’s high-ranking cabinet officials, declared Nepal a secular state, and stripped the monarchy of its control of the armed forces. By June negotiators from the Maoist party and the coalition government had reached an agreement to establish a new interim government and constitution and to hold elections to the Constituent Assembly.

The abolition of Nepal’s 240-year-old monarchy eradicated the political foundation of a brutal caste society that has impoverished the Nepalese masses. Nepal ranks among the 50 poorest countries in the world. Eighty-five percent of the population lives in rural areas without dependable electricity, running water or basic sanitation.

Malnutrition is rampant among children and one-third of the population lives below the official poverty line. Literacy runs a little less than 50 percent and only 35 percent among women. Nepal’s infant mortality rate is 62 deaths per 1,000 live births, compared to five deaths per 1,000 in socialist Cuba.

Almost half the country is unemployed. Poor living conditions fueled the militant consciousness of the masses and paved the way for the Maoists to enjoy a mass base of support for the revolution. Even though it is a small, semifeudal, landlocked country of only 29 million, the advances made during 12 years of Nepal’s revolution are quite significant.

The recent political developments in Nepal are a vindication of scientific socialism and the strategy of people’s war. Not since the South African liberation struggle first defeated apartheid and then brought Nelson Mandela and the African National Congress to power in 1994, has an armed struggle succeeded in bringing about a political revolution.

Nepal’s Constituent Assembly elections and the Maoists’ first place victory, the abolition of monarchy and establishment of a democratic republic, are the successes of a socialist-led armed political revolution. The Maoists were able to accomplish these goals despite firm support for Nepal’s feudal monarchy by the United States, Britain and India.

Nepal’s revolution is at a sensitive juncture—land reform has yet to be addressed. There is extreme pressure from opposition parties to return all properties seized during the course of the people’s war, and the Maoists are attempting to integrate their people’s army with the former Royal Nepalese Army, potentially leaving the masses defenseless if a royalist counter-revolution is attempted.

Internationally the revolution is isolated—the Soviet Union no longer exists, China no longer actively supports armed revolutionary movements, and Cuba still struggles every day just to defend its 50-year-old socialist revolution. The Maoist leadership is well aware of the obstacles they face and have called upon revolutionary forces worldwide to support the Nepalese revolution.

The state of the revolutionary movement in Asia takes on new significance in light of the recent advances made in Nepal and the rising global capitalist crisis. Merrill Lynch chief, John Thain, recently admitted that emerging markets—like those in the Philippines and India—will not be spared from this crisis since all equity markets are linked, and each individual economy will be affected according to its reliance on global trade and commerce.

As the crisis escalates in these emerging economies, the necessary conditions for the advancement of armed struggle may become more favorable. Dedicated, experienced revolutionaries exist throughout Asia ready to push the struggle forward in such an event.