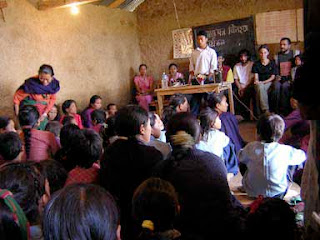 Some years ago when I started to read The Worker, the organ of the Communist Party of Nepal (Maoist), I was a bit puzzled by its title. After all, I thought, there are not many workers (proletarians) in Nepal where the great majority of the people are peasants of various kinds. I assumed that the publication was called The Worker because Marxism-Leninism- Maoism holds that in an economically backward, semi-feudal society the proletariat must be the leading element in the struggle against imperialism and feudalism even though they constitute a minority of the population. As a result of my recent visit to Nepal I have come to view the matter somewhat differently.

My experiences in Nepal reminded me of the conception of the proletariat developed by the young Karl Marx during the eighteen forties. It is worth quoting in full a passage from the Economic and Philosophical Manuscripts of 1844;

“Where is there, then, a real possibility of emancipation in Germany ?

This is our reply. A class must be formed which has radical chains, a class in civil society which is not a class of civil society, a class which is the dissolution of all classes, a sphere of society which has a universal character because its sufferings are universal, and which does not claim a particular redress because the wrong that is done to it is not a particular wrongwrong in general.

The modern industrial working class had come into existence as a result of capitalist industrialization beginning in the second half of the eighteenth century in Britain followed in the first half of the nineteenth century by the beginnings of capitalist industry in France and Germany . The early working class (industrial proletariat) was very different from its successors in modern Europe today. In origin these workers were peasants who had been driven off the land in the countryside by poverty and capitalist landlords seizing their land. They drifted around seeking paid work and thus became employees in the new and growing factory system. Their traditional rights under a rapidly disintegrating rural, feudal society were being abolished but they had no political rights in the emerging bourgeois parliamentary systems of government.

The point about Marx’s description of the early industrial proletariat is that these were people who have been pushed to the margins of society, whose membership of the emerging capitalist society was weak. Their conditions of work in dangerous factories and their living conditions in filthy slums were such that they were to a considerable extent unable to conform to the norms of behaviour of the wider society, they were in a marginal social position and were literally to a considerable degree dehumanized. Their condition was reflected in the title of an early working class radical newspaper in Britain : Black Dwarf. It referred to the fact that the workers were typically dirty and their growth stunted by poor diet and appalling working conditions.

My first contacts with Nepalese proletarians was with hotel and restaurant workers I met in Kathmandu . I learnt that practically all of them do not originate from this capital city but come from peasant backgrounds in the countryside. They are first generation proletarians who have left their families in the countryside, partly because rural poverty has forced them out. The growing population in the countryside, on a limited amount of arable land with primitive agricultural technology, means that in recent decades millions of Nepali peasants have had to seek a living elsewhere, not just within Nepal but abroad in India and in the Gulf states among other places. In this respect they resemble the dispossessed peasants of Britain two hundred years ago and the peasants of Russia and China in the late nineteenth and early twentieth centuries whose impoverished circumstances in the agricultural countryside forced them to seek a livelihood in the new, growing, urban industrial centres in their countries. Additionally, millions of such people found it necessary to migrate abroad to places such as North America and Australia .

In Europe it was not only economic difficulties in traditional rural economies that stimulated people to move to urban areas or migrate abroad. Also greater knowledge of the world outside their immediate localities, brought about by improved communications, meant that people came to realize that there were different and more attractive ways of life other than those they and their families before them had experienced. In other words, they were attracted by the bright lights of the city. (I realize now, as a result of spending a little time in rural Nepal , that this is literally true. Without effective illumination there is not much one can do during the hours of darkness.) The same is true in Nepal today. In recent decades developments such as new roads, radio and television mean that people in rural areas have become aware of the wider world and have discovered more attractive lifestyles than their traditional agricultural way of life in the countryside. They want to be part of and benefit from the more various and stimulating possibilities in urban areas and foreign countries. They are not simply pushed out of the countryside by poverty but also drawn towards the attractions of the wider world.

Thus in the classical sense of the term the proletariat in Nepal is large, consisting of millions of people. These people have become detached from a traditional feudal way of live while not yet being fully integrated into an urban, capitalist culture. They are relatively detached from the wider society. Their changed social circumstances means that they are open to new ideas and influences. I was impressed by the fact that some of the comrades I met were studying in their spare time, even though they had little of it given long working hours and involvement in political activity. This thirst for knowledge was present among the early proletariat in Britain who set up their own secular Sunday (the only day not worked) schools and set up subscription libraries and discussion groups in public houses. This learning informed the militant struggles to establish trade unions and to secure political representation for the working class.


The fact is that in Nepal today there is a very large proletariat in the classical Marxist sense of the term. These are the people who are leading and pushing forward the revolutionary struggle in that country. The same economic and social processes generating large numbers of proletarians are present in many other less developed, imperialistically dominated countries, e.g. India . This constitutes a potentially explosive revolutionary force, provided that the communists provide correct political leadership, as they have done in Nepal .

Thank you very much Harry. There's no immediate way to access any website for you I will have to look or maybe we can get some help. The description of Nepal was very much as I saw it there.I will be returning very likely in the next year and it would be good to communicate.That quote from Marx you provided is just too perfect.I think what may be termed the "universalism" in what Marx is saying there is very key in the Maoist debate at present and going forward. I am currently posting a series on the very same idea found in Badiou and have in the last month reviewed and written a series on the Maoist debate culminating in the same point.

I don't see the point of this article. Of course there is a proletariat in Nepal and the Third World generally. What is more interesting is that what Marx describes hardly exists at all in the First World.