Venezuela : US Southern command coincides with the agenda of the Democratic Unity Roundtable (MUD) By Jesus Rojas 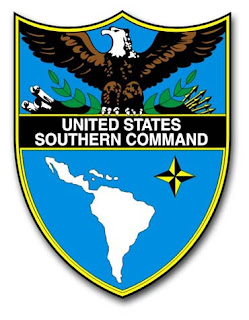 The disclosing of a report attributed to the US Southern Command on Operation
Freedom Venezuela 2 and the escalation of statements by Gen. John Kelly,
outgoing head of this military unit, activated alarms and security protocols of the
Great Patriotic Pole parties and Ministry of Defense.

In that report, the implementation of the Inter-American Democratic Charter by
the OAS is requested, encouraging widespread street protests by issues such
as an electoral or economic crisis, and to initiate the closure of the plan "in July or
August 2016," these are the instructions that emerge from the document signed
by Kurt Tidd Admiral, on February 25, 2016, current chief of Special Operations
Command.

Analysts Atilio Boron and Carlos Lanz, plus some investigative journalism
portals have denounced the US interference through this regional military unit
that develops clandestine missions of non-traditional combat and internal
defense in Venezuela.

About the policies developed by the governments of Hugo Chavez and Evo
Morales, in 2005 was appointed within the Southern Command a special
commission for the two countries.

The leaked document where the content and scope of Operation Freedom 2 is
exposed (to overthrow the Venezuelan government) draws attention to the date
of completion of the strategy: July or August.

Coincidentally, or not, it is the same one first announced on 27 December 2014 by the newly elected member of the new National Assembly, Henry Ramos Allup to activate a mechanism to shorten the term of President Nicolas Maduro.

It is recalled that today the anti-Chavez coalition with majority in the National
Assembly, drives in parallel form a call for a recall referendum and a
constitutional amendment to cut the presidential term.

Another point that attracts attention in the mentioned document, it refers to the
alleged agreement between the Secretary General of the Organization of
American States (OAS), Luis Almagro, and sectors of Venezuelan opposition to
channel the request for application of the Inter-American Democratic Charter.

It impresses because recently, following the opinion of the Supreme Court
which declared void some laws passed by the National Assembly, the diplomat
recalled that in Venezuela, that express request, can be activate the
mechanisms included in the Inter-American Democratic Charter.

In the document the common agenda that has developed with the Democratic
Unity Roundtable (MUD) for "street demonstration " and boost ungovernability is
expressed.

Among the "12 recommendations" highlights an abrupt scenario that can
combine street actions and dosed use of armed violence.

The alleged legitimacy of the actions are covered in Articles 333 and 350
of the Constitution referred to the duty to cooperate in the restoration of the
Constitution and the disowning any regime, legislation or authority that violates
democratic values, principles and guarantees or encroaches upon human rights.

The exposed strategy is developed under an approach of "encirclement and
suffocation" promoted by the anti-Chavez bloc in Parliament.

It is Recommend " convene events and demonstrations, question the rulers deny loans and
repeal laws, among others."

Analyzing the first weeks of the Assembly, and taking as legitimate the report, it appears that the instructions are fully met.

Another "coincidence" between the issues raised by the document Freedom 2
and actions that are developed from international areas are related to "move
others intervention springs indirectly, using former presidents, like-minded
governments and the Parliamentary Alliance Democratic of America.

On the sidewalk of the MUD, members of the Commission on Security and
Defence of the National Assembly, Edgar Zambrano (president) and Armando
Armas (vice president) do not give it credit and they consider it apocryphal
though it has not been denied by the Southern command.

It is worth remembering that the MUD ruled on the extension of the decree of
President Obama, noting that this "unfortunate situation" is promoted by the
Government.

"Hiding behind the flag to protect a bank account with funds corruption is
immoral. Also, hiding behind the word Patria (Homeland) to pretend impunity for
human rights violations ", they said about the executive order against
Venezuela.
Posted by nickglais on 4/27/2016 10:56:00 AM

Hugo Chavez Has an Oil Strategy...But Can This Lead to Liberation?

"Under Hugo Chavez, Venezuela remains locked tightly into the global economy, and Chavez’s program turns on the market value of the oil resource. Even if this program provides some short-term improvement in the conditions of the masses, it cannot be sustained and cannot lead to a world beyond imperialism. And rather than represent the proletariat, Hugo Chavez personifies a section of the Venezuelan capitalist class and radicalized petty-bourgeoisie that bridles at the inequities caused by foreign domination but that cannot conceive of rupturing out of the imperialist-conditioned dominance of oil in the motion and development of the Venezuelan economy."

The United States, which has more prisoners than China or India in spite of its much smaller population and whose police shoot unarmed people in the back with impunity has no moral right to tutor Venezuela on the subject of democracy.

The United States set out to wreck the economies of Russia, Venezuela and Iran by taking actions to sink the price of petroleum. While I am of the opinion that the government of Venezuela has mishandled its mandate to protect the interests of the people, the opposition clearly is working hand in glove with the United States against the interests of the people.

Regarding the issue of corruption, many embezzled dollars now reside in the United States. To really help Venezuela the US is obligated to track down the money embezzled and see that it's returned to the rightful owners - the people of Venezuela.