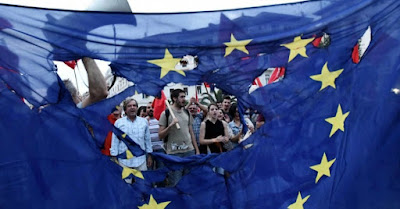 So why does the erratic Marxist ? ( Liberal Social Democrat)  Yanis Varoufakis who says in his interview with Owen Jones  he likes Marx's liberalism ! and not his science go along with Paul Mason and of course the new flip flopper Jeremy Corbyn to announce a desire for a Reformed European Union. 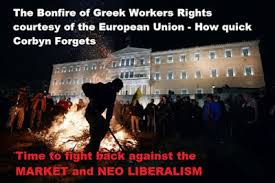 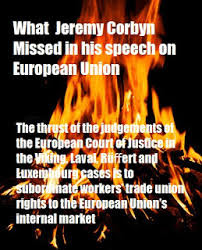 If you line up with the No vote, then you are supporting isolationists, reactionaries and fascists such as Farage and Galloway.

It is not just ultra left who want to 'combat liberalism', but also the reactionaries and the far right. You and Galloway are leftist cheerleaders for the far right.

Who wants a Maoist stalinist dictatorship? Nobody. Your politics are dead comrade.

It is only an internationalist perspective based on the international working class that can lead the revolution.

"The peoples of Europe must regard Europe as a field for a unified and increasingly planned economic life." - Leon Trotsky

Trotskyists like you are just like your leader you cannot stop lying - I have made my position on Farage and Galloway and opposition to their British Nationalism abundantly clear in multiple articles and oppose them with the demands for Welsh, Scottish Kernow and Mannxx national rights against the British Imperialist State.

The political line of Leninism which is expressed in the above article takes account of the national and class struggle in these Islands - Trotsky never understood the national question and had the same bourgeois cosmopolitan outlook expressed by your puerile comments.

Trotsky was wrong in 1915 and 1923 in his dispute with Lenin on the United States of Europe Slogan, That dispute shines light that illuminates to this day.