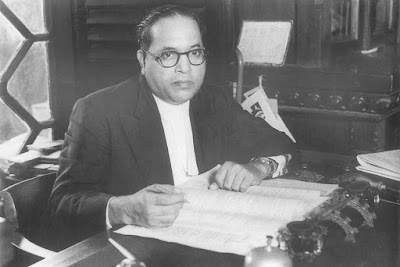 Democracy and Class Struggle welcome this contribution by P Victor Vijay Kumar to stir Marxists out of their lethargy on the question of caste.

Democracy and Class struggle  greatly admire the work of Anand Teltumbde on MLM and Caste here :

We provide a list below of articles to study on Marxism and Caste on the 125th Birthday of Dr Ambedkar to rectify and advance the struggle for Marxism Leninism Maoism.


Ambedkar had exceptionally expended much part of his life on a society he has aspired for, unequalled by any, confronting fervently the despotism of majoritarianist rule in this country.

If one glances through any of his writings, one would only find his anxiety of how majoriatarianists would run this country post-independence and how to contain them and extend due importance to the growth and developmentof minorities (Ambedkar considered untouchables as part of minorities).

While acknowledging that Political Majority is only communal majority in this country, he stated that “…communal majority would be free to run the administration according to its own ideas of what is good for the minorities. Such a state of affairs could not be called Democracy.

It will have to be called Imperialism “. Essentially, he devoted whole of his life in combating this “Political Majority “ overruling the interests of “ Political minorities “. He abhorredMajoritarianism and observed the roots of Majoritarianism inBrahminism in this country.

From his role in public movement to the administrative and advisory roles are concerned, he always endeavored to contain the majoritarianism at each and every point of contact for he felt that our system would be weak not just for lack of proper strategy or proper regulation or proper statute but lack of appropriate “ public conscience”.

If majoritarianism dominates public conscience, he forecasted that it would be nothing but a chaotic life for minorities in this country. “Public conscience means conscience which becomes agitated at every wrong, no matter who is the sufferer, and it means that everybody whether he suffers that particular wrong, or not, is prepared to join him in order to get him relieved “, he said.

Ambedkar clearly indicated that there is not even concern or sympathy on any public issue in this country.What Ambedkar wished was a clear empathy from the ruling segment of the country with that of the entire populace of the country and through his administrative and advisory roles, while he had empirically proven that it is just a mirage of hope for the same.He has been proven time and again correct in this country in the contemporary times.

A society lacking appropriate “ public conscience “ would be totally handicapped to make appropriate laws and institutions.He dreamt of democracy that brings in liberty, equality and fraternity in the country amongst its citizens.

He had ideologically expunged the majorianist philosophy with a commanding and self-possessed criticism against, be it caste-liberal Gandhi, or be it fundamentalist Hindu MahaSabha, or be it rightist Congress or be it a broad philosophy of Brahminism.

Many Marxists allege that Ambedkar strived only for a ‘better’ democracy which is longed by bourgeoisie, which is factually and blatantly wrong.

It is well known that , contrarily to what Ambedkar aspired for , any bourgeoisie democracy strongly denies institutionalizing a democratic economic structure which is founded on principle of equality.

Bourgeosie Governments want only fundamental rights to be incorporated in constitution and argue that the “equality in economic structure “ should be left to legislature. As against this, heargued that “ the State shall not delegate powers to private persons to govern others”.

This essentially formed a governing principle of his idea of “State Socialism “ as a substitute to (Bourgeoisie) Democracy. ( Ambedkar, during his life span of 65 years, which was dedicated for studying caste and fighting against it, working tirelessly in his administrative and advisory roles, singularly, pursuing his academic studies in most abominable conditions and voraciously documenting varied ideas of his politics, was not in a position to model the means of his idea of “ State Socialism “ )

If it is observed, bourgeoisie Democracy fails to consider containing the right of people to formulate alternate institutions which do not give rise to originating the evil of violation of rights.

He asserted “ State Socialism is essential for rapid industrialization of India.

Private enterprise cannot do it, and it if did, it would produce the inequalities of wealth, which private capitalism has produced in Europe and which should be a warning to Indians”.

He further added “ Consolidation of Holdings and Tenancy legislation are worse than useless. They cannot bring about prosperity in agriculture “ and he continued “ Neither Consolidation nor Tenancy Legislation can solve their problem. Only collective farms on the lines set out in the proposal can help them “.

With this, Ambedkar clearly denounces concentration of wealth and argues vehemently for constitutionalizing the cooperative farming and state sponsored industries, which are two basic economic components of socialist equality.Ambedkar’s analysis of class in this country is mapped out in nut shell in his saying “ caste is an enclosure of class”.

This is what had scared Ambedkar that lack of public conscience would eventually kill the spirit of guaranteeing the fundamental rights in the country and he advocated to constitutionalize the principle of economic equality.

The unemployed are thus compelled to relinquish their Fundamental Rights for the sake of securing the privilege to work and subsist “. Ambedkar had a great clarity that without killing the evil which is slamming the fundamental rights , we cannot guarantee fundamental rights, else, constitution will mere remain as a document to prescribe a code of social living.

Ambedkar never advocated for a bourgeoisie democracy and rather despised its hypocrisy strongly pointing out how it manipulates the gap between Constitution and Legislation. With his mark of delightful remark ,

Ambedkar concludes that “ Those who want the economic structure of society to be modeled on State Socialism must realize that they cannot leave the fulfillment of so fundamental a purpose to the exigencies of ordinary Law, which simple majorities – whose political fortunes are never determined by rational causes – have a right to make or unmake.For these reasons, Political Democracy seems to be unsuited for the purpose “

Ambedkar never had extensive dreams about the Parliamentary Democracy and the Constitution in which he was part of. Many stereotype Ambedkarites confound that unimpeachably following of constitution as the ‘only’ path of emancipation he has suggested.He penetrated into the functioning of Parliament Democracy in administrative and advisory roles to continuously perforate it, but not be part of it.

His enormous ideological mightiness coupled with formidable rally of masses behind him fashioned the main stream majoritarianist ( Brahminist) forces remain as frail witnesses failed to diminish his vigour.

Thus, Ambedkar never remained as just a ( Bourgeois ) Democrat ( limiting to just voicing for changes of improvement) or a Liberal ( limiting to reformative attitude ) but a fighter, anti-majoritarian protagonist and a pioneer human rights philosopher.

(PS :Ambedkar never considered conventional communists as torch-bearers of masses as he believed that they failed in their Marxist perspective to understand caste polarization and concentration of wealth in the hands of only few caste elite of this country. However, his very attempt to compare Marx with much admired and revered Buddha itself manifests that he had considered Marx as one of the prominent ideological and philosophical pioneers in the world . Ambedkar differed with principles of communism basically on two fronts – (i) violence of bloodbath ; ( (ii) unending dictatorship in the name of proletariat . Marxists may like to confront him for not suggesting alternate forms of State Rule and means of achievement therefor, they need to consider the limited time and resources available to Ambedkar for he was unassisted and lone combatant expending his entire life exposing caste polarization politics and studying philosophy of Brahminism. He felt immense and immediate need to slacken off caste system to provide much needed relief for the large caste-encumbered sections of this Indian society, rather than waging an equivocating long drawn revolution needing blood sacrifice.However, certain places of history pointing out to his unfinished writings indicate that Ambedkar was breaking down the principles of socialism to deduce to an eclectic understanding of the form and means of a rightful living.)

( The writer is a CFO of a large infrastructure group based out of Hyderabad. He is a writer and critic. For any queries on the above article, he is reachable through his mail ID – pvvkumar@yahoo.co.uk or face book ID ‘P V Vijay Kumar’ )#