Shakespeare and his World Perspective : a Marxist view by Aleksandr A. Smirnov : 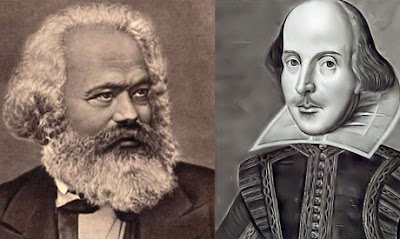 Shakespeare was a humanist, a thorough representative of the epoch that Engels called "the greatest progressive revolution mankind had known up to that time. Inasmuch as he expounded the new morality, the new philosophy and ideology, which were about to supplant those of deteriorating feudalism, Shakespeare was an integral part of his epoch in the broadest sense of that word. But because a thousand threads bound him to the specific conditions which attended the development of capitalism in England, he also belonged to his generation.

The ideological contradictions and the extraordinary complexity of his work are due even more to the combination of these two factors than to the involved socio-economic conditions of his time, although these, too, were important. What Engels called "bourgeois content in feudal form" is always manifest in his works. Often in the same play, and even in the same act, there may be found conflicting ideas.

This complexity has so bewildered the bourgeois critics, that they have gone so far as to maintain that Shakespeare was a genius who merely presented all the possibilities and tendencies of human thought with no consideration or awareness of world perspectives. Some of them have attempted to ascribe Shakespeare's work to an aristocratic author; others have advanced the hypothesis that Shakespeare's plays were written by several authors, differing in their ideological and class position, and that Shakespeare merely edited the entire collection. Even Soviet critics have at times formulated incorrect theories, which attempted to settle the question by dismissing it. There has appeared quite recently the thesis of the "three" Shakespeares: the political adapter, the technical formalist, and the philosophical poet. Such theories are evasions. It is necessary not only to indicate the complexity of the plays, but to determine its causes, the organic rather than the formal unity.

The organic unity of Shakespeare's work emanates from his striving to mirror objectively the life process, by distinguishing the fundamental from the accidental, the permanent from the transitory, and to interpret this process in the light of the new world perspective.
The contradictions mentioned previously prevented Shakespeare's world perspective from fully crystallizing This world perspective is, therefore, revealed only as an aspiration and a tendency, which, because of the nature of the class that had championed it, could not be realized.

It would be futile to attempt to find a prescribed morality in Shakespeare. His morality is of a general tenor, not consisting of dogmatic tenets, but of broad rules of conduct. Such is the rule, or principle, of trust in Hamlet, King Lear, and, to a lesser extent, in Coriolanus; the principle of conscience in Othello and Macbeth; the principle of mercy in The Merchant of Venice and Measure for Measure, and so on. Even surpassing these is the principle of the creative love of life, and the heroicstruggle for the preservation of its best aspects.

From his own generation, Shakespeare drew the material for the concrete expression of these abstract principles. It had either been created by his own generation or had survived in tradition. Together with a positive interpretation of royal power as the servant of the nation, his plays contain an apology for absolutism; together with a passionate plea for humanity, a relative exoneration of murder; together with an unconditional recognition of equality, a relative defense of hierarchy. Thus his vision of the present contained unerring intimation of the future.

Shakespeare does not sermonize; he is never didactic. The moral aspects of each problem and each situation are revealed so forcefully, that the reader is inescapably compelled to draw his own conclusions. In this light, it can be said that Shakespeare's work abounds in moral elements. Accordingly, he elucidates the problems of the individual: his rights, his relations to the family, the state and society, and the race question. He always stresses the social roots of every problem. His conception of society is based on a broad and profound conception of the individual.

The tragic and comic elements are presented with equal force; however, they are not confined to tragedy and comedy respectively. A sense of the tragic permeates the gayest comedies, each of which contains socio-molal dramatic conflicts which bring the protagonists to the verge of ruin. Every tragedy is illuminated by an affirmation of life: Lear's suffering leads to a spiritual regeneration; Othello's, to a rebirth of faith in Desdemona's purity and in human nature at large; Antony's death, to an enlightening revelation of the universal historical process. Shakespeare unceasingly strove towards an understanding of the life process in all its extent and profundity. He explored the depths of human suffering, and through his understanding pointed the way to ethical and social values. Shakespeare rejected the medieval notion of "predestination" and mans "mission on earth." He recognized but one destiny; to exhaust all human creative possibilities. Having faith, like all the other great humanists, in the innate "goodness" of human nature, he believed that if man were allowed to develop naturally and fully in accordance with the needs and demands of society, he would achieve not only happiness, but social perfection.

As for the problem of "evil," Shakespeare's point of view is best summed up in Romeo and Juliet (II, 3) :
Nor aught so good but, strain'd from that fair use,
Revolts from true birth, stumbling on abuse:
Virtue itself turns vice, being misapplied;
And vice sometimes by action dignified.
The whole meaning and content of the life process is man's unceasing struggle to achieve the "common good." It is a heroic struggle but there is no assurance of complete victory. Shakespeare's optimism, is strengthened by this philosophy. The necessity for man's development thus becomes the unavoidable result of his nature, which in turn is determined by a series of causal relations.

Shakespeare's analysis of the life process leads to a disclosure of these interconnections. His method is scientific, combining as does Bacon's, the empirical and rational approach to an explanation of natural events and the spiritual activities of man. We are, therefore, justified in characterizing it as a materialist method. Objectively, Shakespeare does not accept the supernatural; religion is not an active factor in his work. Religious phraseology is seldom found; when it does appear, as in Measure for Measure, it merely reflects the language of his day. Not one of his thirty-seven plays, although written when England was torn by religious dissension, contains any evidence as to whether he was Catholic or Protestant. Shakespeare accepts only two forces: nature and man, the latter being the highest and most complex manifestation of the former. Shakespeare is essentially a monist.

That Shakespeare was not the ideologist of the feudal aristocracy is definitely established by his characters, in whom the aspects and forms of feudalism are subjected to the most merciless criticism. King Lear and Antony represent the glory and historical grandeur of feudalism; the feudal lords of the chronicles, its tottering but as yet unbroken power; the French knights in Henry V, its bankruptcy; Bertram in All's Well That Ends Well, its degeneration; the Montagues and Capulets, its pernicious remnants.

Nor is it possible to accept the thesis that Shakespeare was the ideologist of that section of the nobility which was acquiring bourgeois trappings. They, too, are subjected to the severest criticism: the courtiers in Love's Labour's Lost, Falstaff, Polonius and his family, Edmund in King Lear, the patricians in Coriolanus.

The conclusion that Shakespeare was the ideologist of the bourgeoisie is inescapable. It is impossible, however, to designate him as such without reservations. The rapacity, greed, cruelty, egoism, and philistinism so typical of the English bourgeoisie-embodied in Shylock, Malvolio, Iago–are no less scathingly denounced.

Shakespeare was the humanist ideologist of the bourgeoisie, the exponent of the program advanced by them when, in the name of humanity, they first challenged the feudal order, but which they later disavowed. This enabled Shakespeare to subject his class to keen and profound criticism, a criticism motivated by a definite, though not clearly formulated ideal. His strong sense of concrete reality deterred him from creating a utopia, yet he possessed utopian ideals.

At a later stage of bourgeois development Shakespeare became a threat to that class which had given him birth. The bourgeoisie have never been able to understand or accept the revolutionary elements in Shakespeare's work, because these immeasurably transcend the narrow confines of bourgeois thought. They have attempted, therefore, to transform his revolutionary humanism into specious philanthropy and to interpret his concepts of mercy and truth as "tenderness" and "righteousness"; his continued appeals for patience–perseverance in the struggle to attain the ideal–as "submissiveness"; his disregard for religion and metaphysics as "philosophical and religious tolerance." And so, the bourgeoisie have crowned him with the empty title: "The Universal Man."