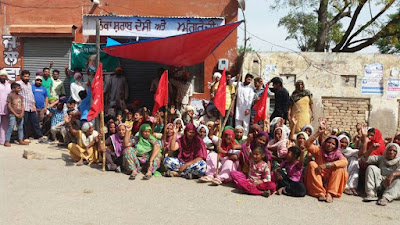 We just concluded the 25th anniversary of the historic martyrdom in Sewewala which was a turning point in the revolutionary history of Punjab.

In the lats 25 years there has been a much more organized movement which could arguably have prevented a Khalistani fascist attack .

However state repression has accentuated with a series of murders of peasant leaders.

One of the most complex issues in Punjab is the topic of Dalit agricultural labourers and how they would be liberated.

Another activist Amarjeet was also critical of all trends from Liberation.New Democracy and C.P.R.C.I.(M.L.)

He felt that the question of agrarian revolution and capture of state power was neglected right from 1972 and was critical of the trend formulated by late Harbhajan Sohi.

In his view topic of Sikh nationality was neglected.

Amarjeet basically upheld the trend of the C.P.I.(Maoist) which upheld seriously taking caste question into account and upholding and merging the positive aspects of B.R.Ambedkar.

He wished the Punjab mass organizations emulated the trend of the erstwhile peoples ware group in Andhra in functioning of mass organisations like Radical Students Union.

Basically He and Sanjeev Mintu although admiring struggles and efforts were critical of ther B.K.U(Ugrahan) and Punjab Khet Mazdoor Union for neglecting the landless labour question.

In their view although armed struggle could not be started in Punjab like in other states at least it's inclination should prevail.

Although I personally still support the trend of P.M.K.U I visited the village of Amol where a convention was held and got a report on a struggle led by C.P.I.(M.L.) New Democracy in Garacho village in Sangrur.

When visting 2 villages with the Krantikar Pendu Mazdur Union I witnessed the discrimination between the landed and landless peasantry.

The houses were not pucca,about 15 people stayed in one room,often family members of dalit s faced social boycott,proper toilets were not built .

I met an activist of Naujwan Bharat Sabha ,Jagsir who felt basically all the organizations of the landed peasantry boycotted them.

He felt that only in areas of work of P.M.K.U.did the B.K.U(Ugrahan ) take initiative.Jagsir was a victim of Social boycott. it is significant that most of the victim of the Sewewala massacre 25 years ago were dalit agricultural workers and that the present leader of P.M.K.U was from that very village .
The Khalistani movement often killed migrant labour or landless labourers ,communalizing the jat peasantry.

The author feels that subjective conditions do not exist yet like in Dandkaranya for launching protracted peoples war or agarian revolutionary movement but stronger leadership of a revolutionary party is need to lead the agricultural labourers movement .

To me in that late comrade HBS made the biggest contribution.In this piece I will give some brief reports of meetings held for the demands of agricultural landless workers in Punjab.

HISTORIC GATHERING IN NAMOL VILLAGE OF AGRICULTURAL LABOURERS LED BY KRANTIKARI PENDU MAZDUR UNION AND NAUJVAN BHARAT SABHA.THEY MAY TURN A SPARK INTO A PRIARIE FIRE.THE MAIN DEMAND WAS FOR 1/3 RIGHT IN PANCHAYAT.ABOUT 150 PEOPLE WERE PRESENT BUT QUALITATIVELY IT WAS A GREAT SUCCESS.PAINSTAKING WORK BY ACTIVISTS SOWING SEEDS FOR BUILDING A MOVEMENT.

A major stride was made in the revolutionary agricultural or landless labourers movement in Garacho village in Sangrur where an impressive mobilisation of 5000 peasants from 104 villages assembled in a meeting of the zameen prapat sangrash commitee organized y the Pendu Mazdur union of the C.P.I.(M.L.) New Democracy,representing the rights of the dalit agricultural workers.

They demanded the 1/3rd reservation right in the panchayat of a village which was promised.Unfortunately the dalits only receive it by giving money to landlord agents and politicians.Often their demands are boycotted.

In the conference other demands were for 10 marlas of land to every landless labourer's family and for implementation of awarding of 17 acres of land to all dalits.In vilage of Amol the landed peasantry boycotted a dalit labourer Jagseer.

The dalit labourera redressed grievances towards the attituide of the landed peasantry and landed peasasnt organizations.

The author was presnt in a subsequent meeting commemorating Shaheed Bhagat Singh in the same area by Naujwan Bharat Sabha. http://indiatoday.intoday.in/story/dalits-communal-farming-collective-crusade/1/464831.html

DALIT RESISTANCE IN PUNJAB IS A TRIBUTE TO THE PHILOSOPHY OF BABASAHEB AMBEDKAR.THEY CAN TURN A STREAM INTO A MIGHTY OCEAN.