Seems he had a memory lapse when he made statement below - he would never lie would he ? 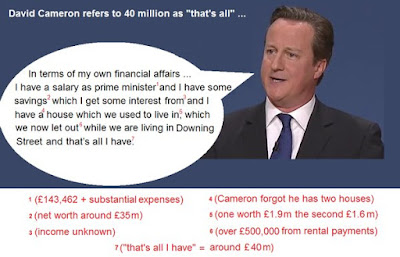 David Cameron has sensationally admitted he trousered thousands of pounds in profits from cash staked in his dad’s offshore firm.

A shame-faced Mr Cameron admitted to owning thousands of offshore shares with wife Sam, which they flogged for a whopping £30,000 just weeks before he became Prime Minister.

Labour MP John Mann said: “Cameron has been less than honest. He should resign immediately."

In a bombshell interview with ITV’s Robert Peston tonight, the PM admitted he and Sam bought thousands of shares in his dad’s tax haven firm Blairmore in 1997. 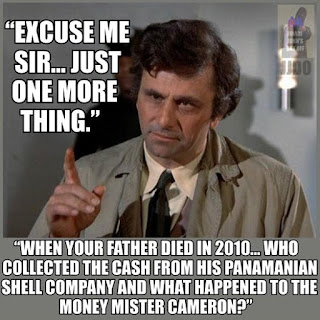 When his Father died in 2010, David cameron was already Prime Minister. So who collected the money from the company in Panama and what happened to that money? Or is it it still sitting there?
Why are the journalists not asking this?
**Edit**
So it appears the company was moved to Ireland in 2010 and has assets of £35 Million. So who owns that company now? Were death duties paid on the assets?
"A source close to Blairmore Holdings - which is still operating with assets of £35 million – said the company had been moved because its directors believed it was about to “come under more scrutiny”. "
http://www.telegraph.co.uk/…/panama-papers-david-cameron-f…
Posted by nickglais on 4/07/2016 03:15:00 PM