Much of the Polish fascists  propaganda and hatred is directed towards the left and the LGBT community. It is also deeply anti-Semitic and, more and more, is targeting the Roma.

It also finds support amongst some church and “family values” groups that support the movement’s attacks on abortion and LGBT rights. 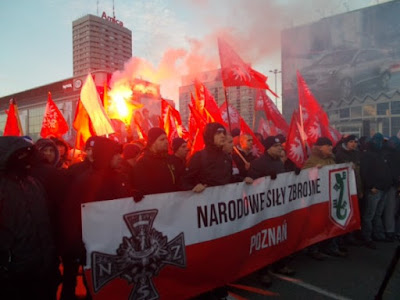 Democracy and Class Struggle is studying what can be described as a first stage of Fascism from India to Turkey to France and Poland to USA.


We are interested in the  universals in Fascism but realise than much is specific to India and Turkey and France and Poland and USA.


Contrasting the views on  Religious Hindu Fascism with the European and American emerging Fascism allows us to identify universals but should not make us overlook Fascism's localisms and specificity at the beginning of the 21st Century.