They highlighted the fascistic policies of the present B.J.P.government which enslaved the toiling masses.

In their view such ruling class parties adopted the same rule and divide policies of the British colonial masters to divert the broad masses from the burning issues of the day.They explained the govt policies leading to barbaric retrenchment of workers,denial of minumum wages,proper housing, medical facilities etc.

They explained the historical connection between the pro-colonial politics of leaders like Gandhi and Nehru with the leaders of today.

It explained how fashion ,consumerism ,communalism and casteism was promoted.The speakers explained the need for building progressive libraries and youth clubs or centres promoting anti-imperialist and democratic culture .

The most prominent speakers were comrades Prasen Spark, Amit, Jaju,Nishu and Anghad.

The speakers  were divided explaining the communal-fascistic nature of ruling class parties,the need to form democratic institutions,and the cultural effect of Imperialism in India and the enslavement of women in India.The most effective campaign took place in Mau and in Ambedkar Nagar .

In Ambedkar Nagar a distance of 50 km was encompassed by the activists covering 7 areas.In Mau the people pursued the activists to stage another campaign .They most receptively grasped the message of the campaigners.

Although affected by the communal nationalism of the state the masses could gauge how the present rulers were trying to divided them from their basic problems.Earlier the same organizations had taken out a serious campaign exposing the fascistic arrest of Kanhaiya Kumar in J.N.U.and the factors causing Rohit Vemula's suicide.The activists displayed breathtaking stamina traversing so many regions illuminating the spirit of the martyrs.The question of fascism was dealt with ion the language of the masses ,particularity about the pretentious nature of nationalism.

The secular politics of Bhagat Singh,Sukhdev and Rajguru was portrayed in light of fascism and casteism.The example of how an Industrialist like Vijay Mallya could siphon of so much public money was illustrated.Cultural programmes were staged rendering the message of the martyrs.
I was present in the concluding phase in Varanasi and Allahabd.The leader of the campaign,Prasen Spark stressed on the formation of Nuajwan Bhrat Sabha units and to build class struggles of the broad masses.

Such a unit was already formed in Ambedkar nagar in Jusi village.

He stressed on politics in such organizations compatible with that of the political consciousness of the masses and not imposing Marxist-Leninist-Maoist politics,

To me such campaigns are the need of the hour when communal fascism of the Hindutva breed and casteism is strengthening it's tentacles. 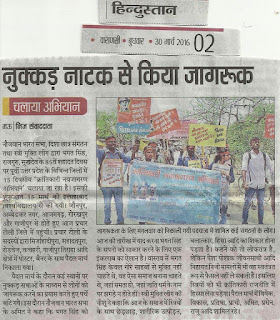 I was impressed with the resolute determination of the activists blazing the spirit of revolution.Such a brigade is an inspiration to the whole country.Even the press regularly gave it coverage.The numbers were small but the quality of work impressive.Such activists are sowing the seeds for a democratic youth movement.combating ruling class and revisionist politics.

Earlier I was present in the state of Punjab observing the Shaheedi programmes  highlighting the connection of agrarian revolutionary movement with the message of martyrs.I was greatly impressed with the cultural programmes there.

There was a remarkable programme by Lok Sangram Manch affiliiated to Revolutionary Democratic Front  in Senewal village in Ferozepur which was often attacked by the state's forces since 15 years.About 600 people attended and the activists resolved to create an alternative to ruling class politics.

The policies of tyrants like Baba Randev and the ruling class portrayal  of Shaheed Bhgat Singh was contrasted with secular,revolutionary politics.

This time heroically the Lok Sangram Manch supporters combated the criminal elements who threw water from cannons to sabotage and staged the rally there.

In Gotha village near Sangrur a relatively small l but quality programme was staged by the NBS of C.P.I(M.L.) New Democracy.

In Patiala a quality cultural programme was staged in the railway union area explaining  the nexus between the state's policies and enslavement of the peasantry.

The cultural activists in the plays exhibited great skill in relating the burning issues of the day through drama.In other parts of India like Delhi and Haryana impressive programmes were staged.
In Delhi it was staged in working class areas which was significant.
Posted by nickglais on 4/05/2016 09:30:00 AM