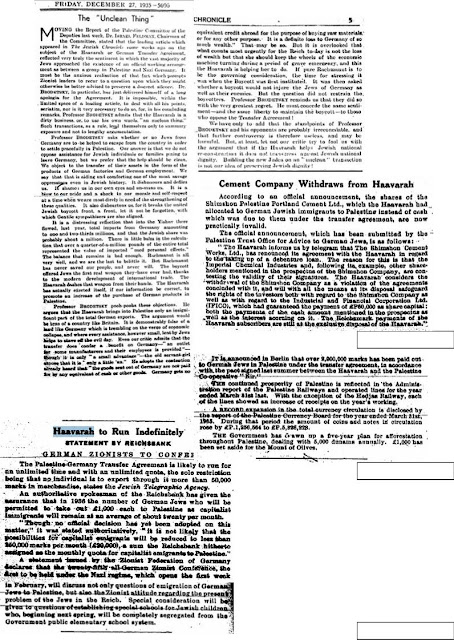 Democracy and Class Struggle says Jews in the British Isles were horrified by the Zionist Haavarah or German Transfer Agreement as this leading article in the British Jewish Chronicle records in 1935 and its undermining of the international Boycott Campaign against Nazi Germany.

The Zionist Haavara Agreement, together with lessened dependence on trade with the West, had by 1937 largely negated the effects of the Jewish boycott on Nazi Germany

Thanks to Tony Greenstein for this research visit his blog here :
http://azvsas.blogspot.co.uk/


Moving the report of  the Palestine Committee at the Deputies last week Dr Israel Feldman chairman of the committee stated that the leading article that appeared in the Jewish Chronicle  some weeks ago on the subject of the Haavarah or German Transfer Agreement reflected very truly in the sentiment in which the vast majority of Jews approached the existence of the official working arrangements as between a group in Palestine and Nazi Germany.

It might be the anxious realisation of the fact that prompts Zionist leaders to recur to the question upon which  they might otherwise be better advised to observe a discreet  silence.

Dr Brodetsky in particular has just delivered himself a long apologia for the Agreement.

It is impossible within the scope of this article  of a leading article to deal with all his points ,seriatim, nor is it very necessary to do so , for in his concluding remarks Dr Brodetsky admits the Haavarah is a dirty business,or to use his own words an 'unclean thing'

Such transactions ,as a rule ,lend themselves  only to summary exposure not to lengthy argumentation.

Professor Brodetsky  as whether or not Jews from Germany are to be helped in order to settle peacefully in Palestine.

Our answer is that we do not oppose assistance  for Jewish individuals or families planning to leave Germany, but we prefer the help to be clean.

We object to the transfer of their assets in the form of the products of German factories and German employment.

We say that this is aiding and comforting one of the most savage repressions even in Jewish history.

It dishonours and defiles us.

It shames us and un mans us,it is a blow to our pride and a shock to our morale and self respect at a time when we are direly in need of strengthening those qualities.

It also disheartens us for it breaks the united Jewish boycott front, let it not be forgotten ,with which Gentile sympathisers are also aligned.

It is a distressing reflection that in the Yishav there flowed last year total imports from Germany amounting to one and two thirds millions, and that the Jewish share was probably about a million.

There is little balm in the calculation that over a quarter a million pounds of the entire total total represented the value of imported "used personal effects".

The balance that remains is bad enough.The Rachmanut is all very well and we are the last to belittle it
.
But the Rachmanut has never saved our people and never will. 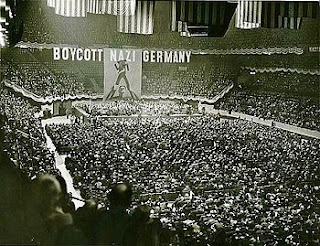 The Boycott offered Jews the first real weapon they ever had, thanks to the development of international trade.

The Haavarah dashes that weapon from our hands.

The Haavarah has actually exerted itself,if our information is correct to promote an increase in the purchase of German products in Palestine.

Professor Brodetsky pooh poohs these objections.He argues that the Haavarah  brings into Palestine only an insignificant part of the total German export.The arguement would be true in a country like Britain.It is demonstrably false of a land like Germany which is trembling on the verge of economic collapse and where every assistance,however small staves off the evil day.

He adopts the contention already heard that the goods sent out of Germany are not paid for by any equivalent of cash or other goods. Germany get no equivalent credit abroad for the purpose of buying raw materials abroad or for any other purpose.

It is a definite loss to Germany of so much wealth. That may be so. but it is overlooked that what counts most urgently for the Reich today is not the loss of wealth but that she should keep the wheels of the economic machine turning during a period of grave emergency  and this is what the Haavarah is helping her to do.

If pure Rachmanhut is to be the governing consideration, the time for stressing it was when the boycott was first instituted.

It was then asked whether a boycott would not injure the Jews of Germany as well as their enemies.The question did not restrain the boycotters.

Professor Brodetsky reminds us they did so with very much greatest regret. We must concede the same sentiment - and the same liberty to maintain the boycott - to those who oppose the Transfer Agreement !

We have only to add that the standpoints of Professor Brodetsky are probably irreconcilable and that further controversy is therefore useless and may be harmful.

But at least, let not our critic try to fool us with the argument that if the Haavarah helps Jewish nation reconstruction it does not transgress against Jewish national dignity.

Building a new Judea on"unclean" transaction is not our idea of preserving Jewish dignity.

FREE BOOK : ZIONISM IN THE AGE OF THE DICTATORS BY LENNI BRENNER
http://vho.org/aaargh/fran/livres/LBzad.pdf

Yiddish Labour Movement Songs in honour of Anti Nazi and Anti Zionist Jewish Comrades in their struggle for Socialism.