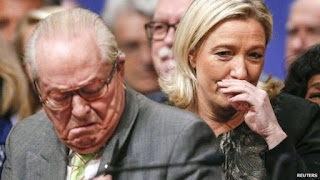 France's far-right political dynasty have been dragged into the 'Panama Papers' scandal, as Front National (FN) founder, Jean-Marie Le Pen, and several aides of his daughter and party leader, Marine, were accused of stashing wealth away in offshore tax havens.

The allegations were made by Le Monde, one of more than 100 media outlets involved in analysing more than 11 million documents leaked from secretive Panamanian law firm Mossack Fonseca.

According to the newspaper, 87-year-old firebrand Jean-Marie is suspected of dissimulating part of his multimillion assets through a shell company set up by his former butler, Gerald Gerin, in the British Virgin Islands. The company, Balerton Marketing Ltd., was allegedly used to stow away a €2.2m (£1.75m, $2.5m) fortune in cash, titles and gold bars.