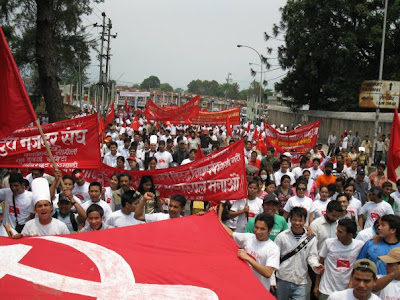 May 1st in Nepal: rumblings of People’s Movement-3.

On International Workers’ Day, the Unified Communist Party of Nepal (Maoist) [UCPN (M)] mobilised between 500,000 to a million supporters to demonstrate on the streets of Kathmandu and then enforce a general strike around the country. The peaceful strike was called off after 6 days because of irresponsible acts of the Nepalese puppet government, colluding to instigate violence on the peoples’ peaceful struggle, and the difficulties this was causing for working people. But the passion and enthusiasm of these hundreds of thousands of people for a New Nepal heralds the beginnings of the Third People’s Movement. Women, different ethnicities, dalits and the oppressed classes took to the streets in support of a federal, democratic, People’s Republic in Nepal.

The demonstration was organised and protected by the Young Communist League (YCL), the Maoist youth organisation which is proving itself to be the great hope for the future New Nepal. But with the constitution deadline of 28th May fast approaching, both the opportunities and the dangers for the revolutionary movement are reaching ever higher levels.

Capitalist Economic Crisis and the Threat of War

The situation in Nepal is becoming more polarised between the revolutionaries and reactionaries. And internationally, the imperialist system of monopoly-capitalism is experiencing a time of acute crisis. Economic recession has wreaked havoc across the face of the planet. The resistance of the people of Greece against EU/IMF neoliberal intervention which seeks to destroy that country’s public sector is just the tip of the iceberg. And the imperialists’ fear of a double-dip recession or of even more severe depression has not been allayed. In the US, Barack Obama was elected to provide a ‘human’ face to imperialism after the naked greed and aggression of the Bush administration. But the struggle to maintain unchallenged power in the world continues to drive US policy at home and abroad.

In Britain, the expenses scandal and the recent election has laid bare the corrupt and undemocratic nature of the British ruling class. Unemployment has reached 2.5 million and the fragile Conservative-Lib Dem coalition is readying itself for huge cuts in public spending, cuts which will inevitably fall squarely on the shoulders of working people, while the banking elite gets away scot free.

And with all of this, the occupations of Iraq and Afghanistan continue, and the environmental devastation of the planet is allowed to push forward at ever more voracious levels.

The imperialist system is one of monopoly capitalism and economic recession is an inbuilt feature, which no bank manager or politician can prevent. And historically one of the major ways for the imperialist countries to emerge from economic crisis has been war. Obama was elected as a politician in opposition to the War on Iraq, yet US troops remain in Iraq, where the huge embassy provides a permanent base for US imperialism and Iraqi casualties continue to mount. Obama has also enthusiastically pursued a heightened attack on the people of Afghanistan, a war with no end in sight. In Britain, there is virtually no debate on the nature of the War on Afghanistan, which is pursued by all the major parties. And the threat of war against Iran in particular, but also countries such as Yemen and Somalia, is still high.

Principal contradiction: the threat of Indian ExpansionismIn these circumstances the prospect of a Maoist-led New Democratic state in Nepal is unacceptable to the imperialist powers and to India, the local aggressor. No effort is wasted in trying to show the futility of seeking a different system and that all efforts to this end are doomed to fail. But a People’s Republic of Nepal would act as a beacon of hope for oppressed people throughout the world.

In India the state has launched a war against its own people, called Operation Green Hunt. Aimed at crushing the opposition of tribal people and their allies in the Communist Party of India (Maoist) to the exploitation of India’s natural resources by foreign multi-national corporations, Operation Green Hunt is a major new stage in the Indian state’s war against its people. Needless to say, a New Nepal would have particular ramifications for the massive number of oppressed people in India and the continuing people’s struggle there.

At this juncture of the Nepalese revolution there are of course numerous contradictions and questions which have arisen. While the international situation continues to be objectively favourable for the revolutionary forces, with the ruling classes of many countries embroiled in economic and political crisis, the absence of either a powerful global proletarian movement or any socialist states is a problem for the Nepalese revolution. Nepal is a small, poor, landlocked country situated between the huge powers of India and China. Nevertheless, as the internal situation is decisive, the UCPN(M) is continuing to mobilise the masses, unite all who can be united with and split the enemy in an effort to advance the massive revolutionary movement of the people to victory.

Having led a People’s War for ten years and united the bourgeois parties against the monarchy in the Second People’s Movement of 2006, the UCPN(M) has greatly increased its influence in Nepal’s urban centres, not least Kathmandu. Because of the peace accord, the People’s Liberation Army (PLA) is confined to cantonments around the country, but it nevertheless remains an independent armed force of the people. In the election of 2008 the Maoists won by far the largest number of seats in the Constituent Assembly, the body which is responsible for the drafting of a new constitution.

But as the erstwhile unity against the monarchy has fallen apart in front of our eyes, the situation is polarising between the revolutionaries, led by the UCPN(M), and the representatives of the status quo, the feudal and comprador capitalist classes and their parties, Nepali Congress and CPN-UML. These classes are united with the goals of Indian expansionism and US imperialism, aiming at all costs to prevent a New Democratic Nepal.

As the revolution continues to advance through many twists and turns, it is crucial for the people around the world to support the people of Nepal in deciding their own future. The meddling in Nepal’s affairs by other countries must be condemned.

It is therefore imperative to support the people of Nepal and unite all who can be united with in opposition to Indian expansionist and US and British imperialist intervention in Nepal!!
Posted by nickglais on 5/20/2010 03:05:00 PM