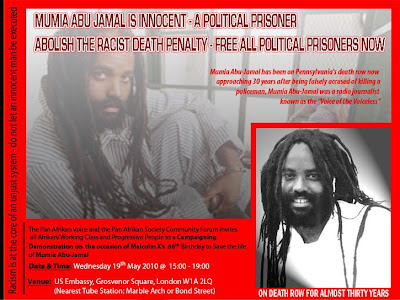 Sign the petition to US President Barack Obama to save the life of Mumia Abu-Jamal Now !
http://mumialegal.org/node/72

WASHINGTON (FinalCall.com) - For the second time in just five months, 150 supporters of Mumia Abu Jamal marched to the U.S. Justice Department to demand both a civil rights investigation and a meeting with the department's Civil Rights Division Director Thomas E. Perez.

In 1982 Mr. Abu Jamal was convicted of murdering Philadelphia police officer Daniel Faulkner, in a trial which Amnesty International, the NAACP, and dozens of human rights organizations and observers around the world have condemned as patently unjust.

“We know—we heard all the talk about what was going on—about the racist judge, the (incompetent defense) attorney who did not know what he was doing, we know about that,” said the Rev. Patsy Jenkins from the prison ministry at New York's historic Riverside Church April 26.

“We knew it was a conspiracy-they've been doing it for years and years. It's time for us to get up and mobilize. So many people do not know about Mumia Abu Jamal. This man, who has been a voice for the voiceless, an activist, a socially responsible person who's concerned about his people and righteousness, has been locked up in solitary confinement in a cement box for almost 30 years for something he did not do,” the Rev. Jenkins continued. “That's why we are here today.”

Organizers of the Campaign for a Civil Rights Investigation of the Case of Mumia Abu Jamal presented the attorney general's office with the second installment of petitions, now totaling 40,000 supporting their demands.

Mr. Abu Jamal's supporters insist there has been “a conspiracy to silence Abu Jamal's voice and ultimately to execute him, despite extensive evidence of his innocence and the fact that he never had a fair trial or appeals process,” the committee said in a statement.

Advocates cite an ongoing conspiracy in the case, which began long before the December 1981 incident with Officer Faulkner. It dates back to 1968 when, at age 14, Mr. Abu Jamal was a founder of the Philadelphia chapter of the Black Panther Party for Self Defense. More than 800 pages of files and surveillance records were accumulated prior to 1978, even though there was no evidence of Mr. Abu Jamal being involved in any criminal activities.

Led by the FBI, White law enforcement authorities all over the country—and in Philadelphia—implemented COINTELPRO (Counter Intelligence Program). They routinely set out to “expose, disrupt, misdirect, discredit, or otherwise neutralize the activities of Black nationalist hate-type organizations and groupings, their leadership, spokesmen, membership, and supporters, and to counter their propensity for violence and civil disorder,” FBI Director J. Edgar Hoover wrote in 1967. His purpose was to “prevent the rise of a Black Messiah.”

As a teenager in the 1960s and 1970s, Mr. Abu Jamal might have fit that description. “Mumia Abu Jamal—as Black Panther—showed the same level of writing skills and articulation skills that he shows now,” Dr. Todd S. Burroughs, assistant professor of media studies at Morgan State University told The Final Call. “And I say that as someone who's looked pretty carefully at his Black Panther writings and at some of the statements he made as a Black Panther.

“So, he showed the same skills at 14, 15, 16, that he now shows at 56,” Dr. Burroughs continued. “So, he was followed very closely by the FBI. The FBI actually made clippings of every article that mentioned him, and every article that he wrote under his byline for the Black Panther newspaper,” he said.

Prominent international labor groups and leaders, representatives of major religious denominations, as well as respected non-government organizations like the Center for Constitutional Rights, have all lent their support to the call for a full civil rights investigation of Mr. Abu Jamal's case.

“This campaign is one of direct action. It is not a one-shot demonstration or about waiting for Eric Holder or Thomas Perez to grant us what is just,” Pam Africa, convener of the International Concerned Family and Friends of Mumia Abu Jamal said in a statement. “We will be out there relentlessly fighting for what the Department of Justice is mandated to do: guarantee the civil rights of every individual, not just wealthy and powerful senators such as Ted Stevens (R-Alaska),” she said.
Posted by nickglais on 5/16/2010 04:56:00 AM