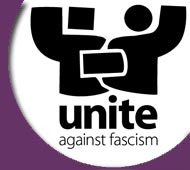 The fascist British National Party suffered a major blow in the general election when its leader Nick Griffin spectacularly failed to take his target seat of Barking in outer east London. Griffin was beaten into third place in the constituency - behind Labour and the Conservatives - with a share of just 14.6% of the vote, compared with the 16.9% the BNP polled in 2005.

Unite Against Fascism joint secretary Weyman Bennett said: "The BNP were defeated by mass anti-nazi activity. We built a coalition against them of black, white and Asian people, trade unionists, LGBT people and members of different faith groups. We systematically visited every ward, every major workplace and council estate, exposing the BNP as Nazis."


The BNP fared no better in their Stoke-on-Trent target seats, coming fourth in each seat. Deputy BNP leader Simon Darby took only 7.7% of the vote in Stoke Central, while BNP candidates in Stoke North and Stoke South took 8.0% and 9.4% respectively.

The humiliation suffered by the BNP in Barking and Stoke came amid a wave of popular revulsion against the party's Nazi and racist politics.

The day before the election BNP candidate Bob Bailey was filmed viciously lashing out at an Asian man in Barking. Former Stoke BNP leader Alby Walker issued a statement condemning the BNP's virulent racism and apologising for his previous involvement in the party.

But results in other areas should warn us against being complacent over the BNP threat. The fascists polled several strong results in Yorkshire, including 10.4% in Rotherham, 8.9% in Barnsley Central, 8.6% in Barnsley East and 7.7% in Rother Valley. And while the BNP was held back in Barking, the fascists made significant gains in the neighbouring constituency of Dagenham & Rainham, where their share of the vote rose from 4.4% to 11.2%
Posted by nickglais on 5/07/2010 12:26:00 PM