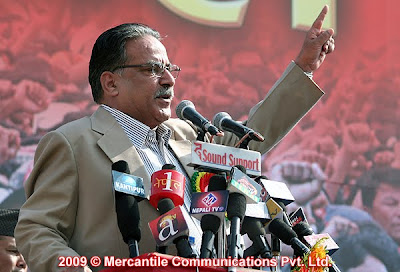 Maoist chairman Prachanda aka Pushpa Kamal Dahal on Saturday said his party would not engage in talks with the ruling parties, but it would wait for their reaction to issues raised by his party concerning the new constitution, peace process and a national unity government before the party decides its next move.

"The ball is now in their court. How we strike depends on the move they make," Dahal said addressing a mass meeting organised by the party at Khula Manch, Kathmandu. He said his party would wait for two days during which it would carry out protests including picketing of Singha Durbar before declaring a stronger stir.

"Our peaceful and disciplined general strike was just a trailer. They (parties) will see the entire film if they don't decide now," he said, adding that the Maoist leadership decided to call off the bandh not because of any pressure neither the party was backpedaling from its protest movement.

"It was not because of the peace rally or any other pressure that we decided to stop the general strike. In fact, we had been discussing for some days about changing the nature of protest and we only arrived at a decision Friday evening," he clarified, adding that the agitations, which the party describes as 3rd Janandolan, would not end until the goals are achieved. He also accused the government of trying to instigate violence in the Maoist demonstrations.

During his fiery speech, Dahal also vented anger at the media and 'Kathmandu elites' for not responding positively to the Maoist protest movement.

He also insisted that the government-sanctioned 'vigilantes' hijacked yesterday's peace rally organised by the professional groups.

The Maoist party organised the mass meeting in Kathmandu and two other cities across the country a day after deciding to call off the general strike. nepalnews.com