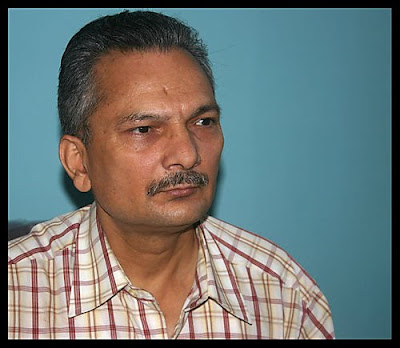 This is from the new issue of Nepal’s Maoist English journal Red Star. Dr Baburam Bhattarai is Vice Chairman of Unified Communist Party of Nepal-Maoist. The interview was conducted shortly before May First.


“….we need a continuous solidarity and support from international proletarian forces for the advancement of the revolution and defend it against the imperialist and expansionist forces attack. So, we appeal to all our comrades internationally to continue with the cooperation to defeat games against revolution of Nepal, for the completion of revolution.”

How are you analyzing the current political situation of the country?

Nepal is passing through historical transition from feudalism to capitalism. Last sixty years people’s movement as being victorious directed towards abolishing of semi feudal and semi colonial structure and replacing it with a new democratic structure social state system oriented toward socialism.

Under the leadership of our party, we waged ten years People’s War and on that basis we had had people’s movement-II. And as a result, we succeeded abolishing feudal monarchy. Basically, the social economic system has not transformed radically. So the need to complete democratic revolution is still there and our party is focusing on completing this democratic revolution in account of the specifities of Nepal and the current world situation.

Accordingly, we want to ensure this radical transformation through democratic and constitutional process but the option seems to be limited as the reactionary forces are galvanizing to fight against radical forces in the country. In that context, the option of peaceful development of revolution seems to be dating out.

What are the important decisions taken by the recent concluded UCPN-Maoist PM meeting?

In our Political bureau meeting made a review of the earlier three month action plans.

Now there is only one month left for the stipulated time of making the new constitution through the Constituent Assembly. The chances of making the constitution within this period sound quite remote as of now. And the reactionaries are hatching conspiracies to dissolve this Constituent Assembly and impose military dictatorship under one or the other guide. In this context, our party PB meeting has decided to mount a massive people’s movement starting from the historic May Day until our basic demands are met.

Other parties are blaming the UCPN-Maoist to be responsible for not writing constitution on time. Are there any other options to apply by UCPN-Maoist when the constitution is not written on time?

It is a baseless charge. The demand of CA and republican set up, federal structuring and secular state were raised by us. But the so called parliamentary forces would not concede to these demands by circumstances. Once the monarchy is gone, these forces now are scared of radical change in society. That’s why; they want to dissolve this CA by imposing military to hide that conspiracy they are raising baseless charges against us.

Which Nepalese people understand very well. The CA is our demand and we are the largest force in the CA and we are in favour of making a progressive people’s constitution through this assembly. We want that CA should not be dissolved rather it should make a constitution. If they dissolve it through the military force, then it will be resisted. The future will take its own course. We won’t be responsible for that.

That means there is no other alternative than to struggle?

We are still trying to build united national government to complete this peace process and make the constitution on time. But the reactionary forces are not responding to that rather they seem to be preparing for military offensive against us. In that sense, we have no option than to go to the masses of the people for mobilizing them in millions and resist the reactionary forces.

You repeatedly talked about the mass resistance against the status quo. But what are you thinking about the formation of united front?

At Last, What are expectation of the UCPN-Maoist with the foreign revolutionary forces?

Would you like to deliver any message to the people and the friends?

Through The Red Star, I would like to all the revolutionary forces of Nepal, South Asia and elsewhere. The present era of imperialism, no revolution of any country can be succeeded without international solidarity in this present global era. All the oppressed people and the workers of the world should unite against the hegemony of the reaction. I would like to appeal to all the revolutionary forces to keep it in their mind and extend cooperative solidarity to continue the Nepalese revolution.
NEW ISSUE OF RED STAR PAPER OF UCPN MAOIST HERE :
http://www.krishnasenonline.org/epaper.php?pub=87
Posted by nickglais on 5/10/2010 11:38:00 AM