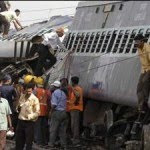 We were not involved in the sabotage in the railway line. Still we are being falsely implicated in it.

(Note: In view of the train accident that took the lives of more than a hundred passengers and left many more injured who had been travelling by Gnaneswari Express, the railways have been contemplating of postponing train services along that route at night and re-schedule its timings accordingly. In response, the CPI(Maoist) has issued a statement on 29 May 2010 that came out in a Bengali daily Ananda Bazar Patrika published from Kolkata. It was published on 30 May 30, 2010 under the caption ‘The Maoists ask the railways to ply trains without fear’ in page 7.)

Let the railway authorities ply their trains on schedule. There is nothing to fear. On Saturday, on behalf of the State Committee of the CPI (Maoist), Aakash issued this statement to the press. “We were not involved in the sabotage in the railway line. Still we are being falsely implicated in it. There is no need to stop railway service on the plea of Maoist sabotage. Let the rail authorities ply their trains. Nothing (no harm) will be done from our side”.

The Maoists stated: We gave a call for organizing a ‘Black Period’ from 23 May to 2 June; it was not directed against the railways. Besides price rise and operation by the security forces, it was also directed against the central government policy of selling out shares of public sector undertakings, taking US assistance for the defence sector and the creation of special economic zones. Our aim was to make propaganda and create awareness on these issues among the people. Wearing black badges, organizing processions comprise part of our programme, but there was nothing against the railways. The Maoists claimed: “Whenever there is any programme against the railways or a call for stopping railway services, there is a formal notification much before that date”. Aakash said: “We do not know who were involved in the incident. But what we do know is that on that very day, the security forces along with the CPI(M) cadres carried out operation in 32 villages under Manikpara and Kotwali police station areas. Houses were broken. Women were tortured, giving rise to much popular anger and discontent.” Discarding the demand for investigation by the WB government-controlled CID and the central government-controlled CBI, the Maoists stated: “Both are biased. So we would welcome a neutral investigation team comprising intellectuals, scientists, engineers and unofficial experts. Let them find out who had done the sabotage and why. We want an independent investigation. We want the truth to come out”.

The Sunday Hindustan Times carried only a brief portion of the statement its Kolkata edition on 30 May 2010 under the caption “Maoists now want independent probe”. The report reads as follows: “Maoists on Saturday once again denied having any hand in the tragedy. Akash, a CPI(Maoist) state committee member, told HT over phone from an undisclosed location that the outfit would welcome probe by an “independent group of intellectuals”.
Posted by nickglais on 5/30/2010 11:25:00 AM