Yanis Varoufakis in his own words - his view of Marxism and Bourgeois Political Economy - our readers can make their own judgement about Varoufakis on the basis of his own words.

History has given him a role to test his ideas as Greek Finance Minister, we wish the Greek People success in their struggle against austerity - his view that saving capitalism is necessary as we are not prepared yet for socialism and that capitalist collapse would lead to Fascism is certainly controversial. 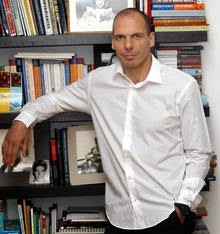 Democracy and Class Struggle says Yanis Varoufakis is a classic reformist believing that revolution today will bring Fascism when in reality it is  the failure of Reformism and lack of a revolutionary path to Socialist Transformation in Greece that will boost the Greek Nazis of the Golden Dawn. The echoes of history from the 1920's and 1930's resonate when the reformists prepared the way for Fascism and opposed revolutionary communism.
Yanis Varoufakis castigates Marx for his 19th Century mechanism but does not understand the dialectic of 20th century history where reformism by failing to transform capitalism into socialism paved the way for Fascism and saw the transformation of  "Social Democratic Erratic Marxists" like Rudolf Hilferding into apologists for "organised"capitalism.
The failure of the German Revolution and the Crisis of 1929 brought forth the erratic Marxist Rudolph Hilferding and the Crisis of 2008 has now brought forth the erratic Marxist Yanis Varoufakis.