Greece: Syriza Will Have to Choose between Scylla and Charybdis by Jerome Roos 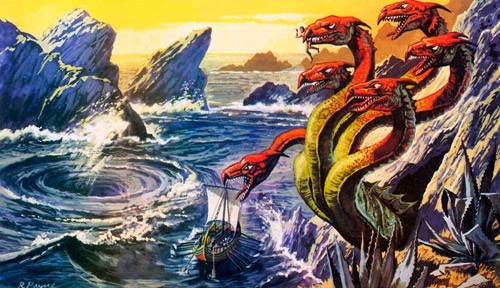 Greece’s leftist government will soon have to confront a critical question: will it accept its creditors’ demands,or will it take unilateral action?

In Homer’s epic Odyssey, the Greek King Odysseus of Ithaca was forced to navigate a narrow strait between the mythical sea monsters Scylla and Charybdis. As it was impossible to steer a clear course between the two, avoiding the one inevitably meant confronting the other. Eventually, Homer’s hero opted to avoid the whirlpool of Charybdis — which could easily have swallowed his ship — and pass by the six-headed monster Scylla instead. After putting up a strong fight, Odysseus and his men lost a number of sailors but saved their ship.

Today, Greece’s young leftist government finds itself on the horns of a similar dilemma. On the one hand, it stares into the whirlpool of a deflationary debt trap that risks swallowing Greek society whole, confining its impoverished and exasperated citizens to decades of debt servitude. On the other, it faces the eighteen-headed monster of the Eurogroup — with the German finance minister Wolfgang Schäuble at its center — which insists on smashing Syriza’s radical experiment and making an example of the leftists by ejecting them from the eurozone if they refuse to stay the disastrous course of austerity.

This epic standoff between tiny Greece and its mighty creditors has left the Syriza-led government stuck between a rock and a hard place. While its defiant rhetoric has energized Greek society and raised popular expectations to unprecedented highs, this same defiance has angered the country's creditors and united Europe’s “extreme center” in a desperate bid to contain the fallout of the Syriza phenomenon. Rapidly closing ranks to prevent the leftists from setting a positive precedent, the creditors' message is clear: inside the eurozone, there can be no alternative to austerity and repayment.

And so the “frenzy of reasonableness” that Greece’s oracular finance minister Yanis Varoufakis had pledged to unleash now appears to be hitting the wall of German intransigence. Reality is dawning: either Syriza faces down the Eurogroup to defend its radical project, or it capitulates and drifts back into the debt-deflationary spiral.

After Monday’s emergency talks collapsed in acrimony, Eurogroup Chairman Jeroen Dijsselbloem added an ultimatum to make Syriza’s options even more explicit: either the government accepts an extension of the existing bailout program by Wednesday evening, or Greece will simply be cut off from further credit by February 28.

Since Greece remains dependent on foreign financing to service its outstanding obligations and fight the deep humanitarian crisis at home, this would put the leftists in the awkward position of having to choose between honoring their obligations to foreign creditors, who expect the debt to be repaid in full and who continue to insist on strict fiscal discipline, or honoring their obligations to Greek pensioners and civil servants, who have collectively pinned their hopes on Syriza’s pledges to defy the creditors and put an end to austerity. In a word, repaying one will require defaulting on the other.

This Homeric dilemma is in turn forcing Syriza to confront a long-standing internal rift among party cadres over the merits of continued eurozone membership. Syriza’s moderate leadership, which according to central committee member Stathis Kouvelakis has steadily distanced itself from the party base in recent years, remains committed to the euro and aims to reform its fiscal and monetary architecture. Inspired by Keynesian visions of demand management and public investment, Tsipras and Varoufakis hope to wield the failure of austerity in Greece as a wedge to transform Europe as a whole.

But not everyone inside Syriza shares this “good euro” vision. The party’s rank-and-file, and especially its radical internal opposition — the so-called Left Platform — holds a very different view, insisting that Greece should keep all its weapons on the table, including the threat of unilateral default and a “progressive exit” from the eurozone. The Left Platform, in other words, would like to see Syriza face down Scylla to avoid Charybdis, defying the Eurogroup to save the ship and evade a lethal debt-deflationary spiral inside the monetary union — even if this comes at a high cost.

Inspired in part by the analyses of SOAS economist Costas Lapavitsas, who is now a Syriza MP, the Left Platform has a more pessimistic analysis of power relations within the monetary union. Unlike the party leadership and Finance Minister Varoufakis, Lapavitsas believes that continued eurozone membership will sink Syriza’s radical project before the leftists even get a chance to hoist their sails or raise their weapons. The internal opposition therefore intends to wield what they consider to be the inevitable failure of the debt negotiations as a wedge to progressively pull Greece out of the euro. It is safe to say, then, that the fault-lines of the eurozone power struggle extend into the top ranks of the Greek government, with the Left Platform constantly exerting pressure on the party leadership to abide by its radical project.  This explains the tricky balancing act that Tsipras has been engaging in this week. The prime minister knows that he cannot be seen to capitulate to his creditors and backtrack on his campaign pledges. Domestically, he has to appease the Left Platform and stick to his defiant anti-creditor stance, which has sent the leftists soaring to an absolute majority in the polls.

At the same time, however, it is becoming increasingly clear that the political economic analyses of Lapavitsas and the Left Platform are turning out to be disturbingly accurate: it is simply proving impossible to steer a clear course between meaningful debt cancellation, on the one hand, and multilateral negotiations on the other. To put it bluntly, Germany and its allies are just not interested in negotiating a debt restructuring or a meaningful easing of Greece’s repayment terms. Their entire strategy is based on being as unreasonable as possible and not granting Syriza a single inch of leeway.


This tough creditor stance appears to be intended purely to torpedo Syriza's progressive program, which is based on the notion that both Scylla and Charybdis can be avoided and Greece and its foreign creditors will arrive at a common solution that benefits all. Yet even if this win-win scenario would indeed be the optimal outcome from a game theoretical point of view, it is proving to be unacceptable to the Germans from a political point of view. For this reason, Syriza's leadership will soon find itself forced to choose between the demands of its creditors and the demands of its internal opposition.

The bottom-line is that Germany and its allies do not seem intent to let Greece off the hook. The reasons for this are clear. If the country’s anti-austerity government were to set a successful precedent of debt restructuring, Podemos in Spain would certainly be next — and who knows what other claimants would step forward if Greece successfully canceled its debts? It is now becoming clear that there are only two possible outcomes: either Greece faces down the eighteen-headed monster of the Eurogroup by unilaterally defaulting, or it will stick to the rules of the eurozone and continue to service its debts.

Needless to say, both options will come at a very high cost. Yet it now seems increasingly obvious that a costly standoff with Scylla is the only way to avoid a deadly dance with Charybdis and save the ship. Without default and exit, Greece will be sucked into the whirlpool of a deflationary debt trap for decades to come. Sooner or later the left-led government will be compelled to choose between a radical experiment outside the euro or a painful defeat within it. As the heroes of Greek antiquity knew well, there can be no glory without struggle — and no victory without sacrifice.

Jerome Roos is a PhD researcher in International Political Economy at the European University Institute and founding editor of ROAR Magazine. Follow him on Twitter @JeromeRoos.
Posted by nickglais on 2/19/2015 09:51:00 AM