India: When Everyone Became a Maoist in Kerala by Ajmal Khan 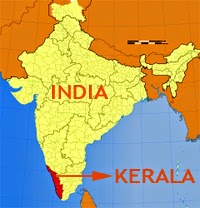 The Kerala police is on the hunt for Maoists for the last one year. Innocent Adivasis and Dalit boys, people working among tribals, human rights activists, people who respond to daily injustices and human rights violations, and even people who "look like Maoists" are being picked up everyday.

What does it mean to be a Maoist in Kerala? To answer this, one needs to closely look at an analysis of the so-called Maoist incidents and arrests that have happened. There are many questions that have remained unanswered in the fog that has been spreading since last year under the label "Maoist".

The recent Maoist story in Kerala starts after the look out notice which was displayed in the limits of Mananthawadi Police station in Wayanad district in April 2014. The notice carried the names and pictures of around 40 people, including a few alleged Maoist guerrillas and a number of social and human rights activist who are active in the mainstream political sphere in the state.

All of the above are public individuals who have a public life and appearance in Kerala society and are known for actively engaging in and responding to different socio-political injustices that have been taking place. This look out notice was contested and condemned by the larger civil society which was shocked at the treatment that was inflicted on the political activists. It was also a reminder to the activists by the state that engagement in activities deemed "against the state" would have the displayed result.

This development has to also be understood in the context where people are waking up and starting to raise their voice against both the injustices that have been historically imposed upon them as well as the new forms of injustice that are being manifested in recent times. All the names on the notice also shared the characteristic that they were from outside the mainstream political parties and, in fact, were their enemies and posed a threat to them in many ways.


Beyond the mainstream narratives of welfare, development, castelessness, communal harmony and the celebrated Kerala model of development, there are hundreds of active social movements that are going on in the state, movements that are led by Adivasis and Dalits for land, against exploitation and violations of even fundamental constitutional rights. (These are political movements and should not be imprisoned to the category of old social movements or new social movements). The recent standing up struggle by Adivasi Gohtra Mahasabha in front of the Kerala secretariat was one of the historic struggles of its kind.

These movements are populated by people evicted and displaced by different projects such as Kadikudam, illegal mining and quarrying in Ambittan Tharish, movements against big road constructions and against tolls for roads and bridges, movements led by women workers for dignity against exploitation and gender based discriminations, youth on the roads for freedom to love (the larger movement created as Kiss of Love) and against fascist attacks and moral policing, the voices of victims of Endosalfan in the district of Kasargodu, Muthanga and Chengara land struggles, Plachimada struggles against Coca Cola company and many others.

All these are happening outside the mainstream feudal, aristocratic, casteist, communal and male chauvinist mainstream political discourse and parties in the state: the Congress, CPIM, CPI, Muslim League and other parties are either together or singly collaborators in their opposition to these struggles.

So, people are left with no option other than to mobilize themselves against the oppressors, a political establishment that includes a huge and powerful gang of industrial and business groups, leaders from various parties, corporations, dominant religious and caste groups and the media. Historically the governments in Kerala have tried to curb democratic rights; and Naxalite/Maoist links has been one of the historical reasons for this.

This is the context in which Maoism took birth or re-birth in Kerala.

The Government of Kerala is prepared to combat the Maoists in a big way. I happened to visit my hometown police station at Kalikavu a few months ago with a friend of mine. It is located on the Western Ghats, allegedly the hub of Maoists in Malappuram. I was shocked to see the police station.

It is an established fact that the CPI Maoist has presence in the Western Ghats and Nilgiris in Kerala. This is also the context in which the Central Government increased funds to combat the Maoists. The Government of Kerala has also introduced the Salwa Judum model to give training and wages to Adivasi youth to monitor Maoist activities in the tribal hamlets. They are called home guards from the tribal community and are paid Rs. 500 per day.

In July 2014, Mr. Jonathan Bold, a Swiss national, Left sympathizer, and student of International Economic History at Paul Bairoch Institute of Economic History in Geneva came on a tourist visa to Kerala. He was arrested in Thrissur after attending a commemorative meeting held for Maoist leader Sinoj at his native place in Thriprayar. Since the police failed to establish any alleged connections, the Kerala High Court quashed the case registered against him and he was released.

In December 2014, Keralaeeyam’s office was raided. Keraleeyam is a magazine which mainly focuses on agriculture, health, environment, human rights, education and gender-dalit-adivasi issues from Thrissur since 1998. The office was raided on the pretext of alleged Maoist connections. About 40 armed police personal descended on the office located in Thrissur town in the dead of the night for the raid and seized copies of Keraleeyam, pamphlets and notices of events conducted by Keraleeyam, books and other documents.

The police took into custody Ajlal (Marketing Manager, Keraleeyam), Viswanathan Alathu (environmentalist), Santhosh (Youth Dialogue activist) who were present in the office at the time of the raid. The three were subjected to intense questioning and detained at Thrissur East Police Station until the next morning. 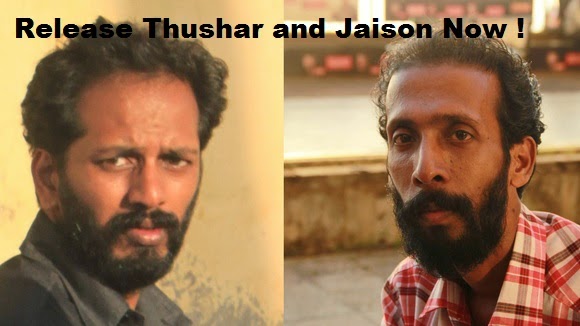 Recently Jaison Cooper, one of the noted figures among the social activists, a blogger who is actively engaged in a variety of people’s struggles in Kerala and Tushar Nirmal Sharathi, lawyer and President of the People’s Human Rights movement, were picked up by the police is Kochin and Calicut: Jaison Cooper in Ernakulam from his office and Adv. Thushar Nirmal Sarathy from Calicut, while he was addressing the press about a protest program to be held there the following day against the increasing violations of the fundamental rights of the people in the state.

Subsequent allegations of connections with the allegedly Maoist attack at Kalamasseri were brought. Both of them have been active in the solidarity committee with Koodankulam anti nuclear movement, movement for the displaced in Mulampilly, People’s movement against the Paliyekkara toll booth, Plachimada people’s movement against Coca Cola, Collective in solidarity with the victims of Endosulfan pesticide, committee against Aadhar, Committee for the protection of Western Ghats, Committee against moral policing, Committee for the release of Dr.Binayak Sen, forum demanding justice to Madani etc. Both of them are being kept under remand even when there is widespread protest against the arrest of social activists.

Two days later two students, Uday Balakrishnan, who is active with youth dialog, (a youth platform which was created couple of years ago) and Shahaid Shameem with the Student Islamic Organisation and Solidarity Youth Movement, were picked up by the police in Kannur district while they were returning from a program which was conducted in solidarity with the Tamil writer Perumal Muruagan. They were accused of alleged involvement with Maoist movement in the state; later it was explained by the police that "they had appearance that they look like Maoist" – that is why they were picked up.

Apart from all of these cases, there are a number of Adivasi and Dalit youths being picked up on alleged Maoist connections on a day to day basis, which does not even get reported as news. You can be a Maoist if you engage with any movement which questions the mainstream development and its effects.

If you go for a solidarity meeting that is conducted on any issues worldwide, if you even have curly hair or your clothes are not washed, you can be a potential Maoist as explained by Kerala police and you can be booked under UAPA in Kerala. The state, with all the other allies, are suppressing the voices that are rising up against historical suppressions and its new forms in the era of neo-liberal development.

The label of Maoist will be granted to anyone who dares to raise this voice.

The writer is an activist based in Mumbai.


...Look, we’ve got this leader, who is one of those rare visionary thinkers and leaders who comes to represent and usher in a whole new phase of things in their given field of expertise. In this case he is ushering in a whole new phase of the communist revolution and a whole new conception of the kind of society and world we need to be building for the benefit of humanity. Think of the role played by a Marx, or a Lenin, or a Mao at earlier stages of history. This is the kind of visionary leader we are talking about.

go to http://revcom.us/a/374/look-weve-got-this-leader-en.html to find out more. I think you may know who he is, initials BA.

A new phase of communist revolution, and a new conception of the kind of world we need be building. Comrades in India need to know about this. Imagine if India had a leader like BA! Imagine what difference that would make!