The statement of the MEP of the KKE, Kostas Papadakis, on the trial to outlaw the CP of Ukraine 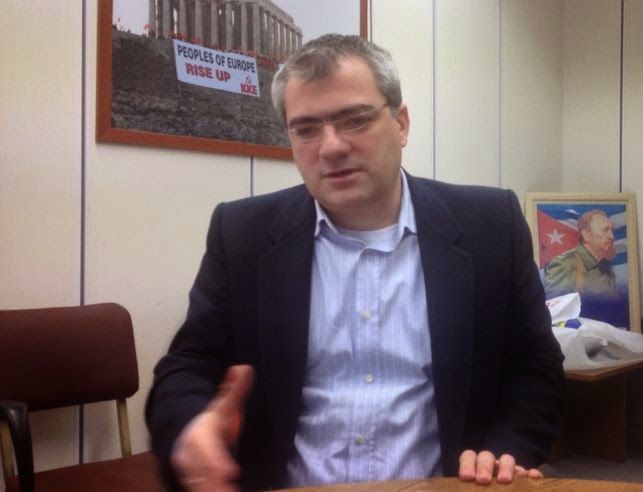 “Today’s trial, which will continue, is just a part of a barrage of persecutions that is underway at the expense of the CP of Ukraine, and also against its individual members and cadres. The persecution and machinations to outlaw the communists and their activity are unacceptable and reprehensible. They attack the people themselves and their rights. The communists of Ukraine made a great contribution to the struggle of the Ukrainian people, to all their achievements, both during the Great Anti-fascist Victory of the Peoples and also during the years of socialist construction, as well as today.
These acts of persecution are dangerous for the Ukrainian people and the peoples as a whole. They indicate the attempts to provide new impetus to the imperialist plans in Ukraine and the wider region. These are plans that have been hatched in this period by the EU, USA, NATO, the bourgeois class of Ukraine and its reactionary government that is supported by fascist forces, in the framework of their competition with Russia.
In this way, they demonstrate that Ukrainian people will face the continuation of the fratricidal war for the interests of the imperialists and the new round of anti-worker measures. The communists are being targeted by the bourgeois class because they are the ones in a position to fight against the anti-people onslaught and nationalist hysteria. They are the ones that can show the way out from capitalist barbarity. The falsification of history, the blatant distortions regarding the contribution of the communists and socialism will not succeed.
The KKE once again expresses its full solidarity with the CP of Ukraine and confirms that it will inform the Greek people about this anti-communist offensive. Through its intervention in the labour-people’s movement, Parliament and EU parliament it will continue to expose and fight against anti-communism. Only the peoples can impede and neutralize every kind of anti-people plan and become the protagonists through their struggle.”
Democracy and Class Struggle has political disagreements with the Communist Party of the Ukraine which we regard as revisionist but we strongly oppose its suppression by the Kiev Junta.
Concerning the Communist Party of Greece we also have political disagreements with them but where we are united with them is strong opposition to the trial of the Communist Party of the Ukraine and opposition to the NATO/EEU Junta in Kiev.
This is not a time for sectarianism but for unity in defence of the Communist Party of the Ukraine.